Back By Popular Demand: The Book of Mormon 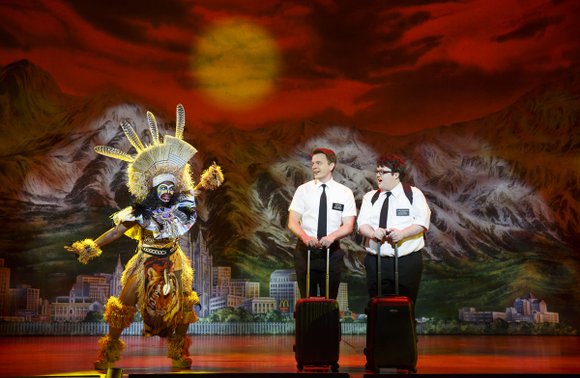 Back by popular demand, THE BOOK OF MORMON, which played a record breaking two week run in 2013 returns to Houston for a limited engagement January 20 – February 8 at the Hobby Center. Single tickets will go on sale October 24 at 10:00 a.m. Tickets will be available at the Hobby Center box office 800 Bagby Street, Houston, Texas, 77002, all Ticketmaster outlets, by visiting www.BroadwayAtTheHobbyCenter.com or www.TheHobbyCenter.org, or by calling (800) 982-ARTS. Group orders of 15 or more may be placed by calling 888-451-5986 or e-mail houston.groups@broadwayacrossamerica.com.

THE BOOK OF MORMON features book, music and lyrics by Trey Parker, Robert Lopez and Matt Stone. Parker and Stone are the four-time Emmy Award-winning creators of the landmark animated series, “South Park.” Tony Award-winner Lopez is co-creator of the long-running hit musical comedy, Avenue Q. The musical is choreographed by Tony Award-winner Casey Nicholaw (Monty Python’s Spamalot, The Drowsy Chaperone) and is directed by Nicholaw and Parker.

The Original Broadway Cast Recording for THE BOOK OF MORMON, winner of the 2011 Grammy Award for Best Musical Theater Album, is available on Ghostlight Records.

Hobby Center for the Performing Arts

Friday and Saturday evenings at 8:00 pm

Saturday and Sunday matinees at 2:00 pm.

The Hobby Center for the Performing Arts is operated by the Hobby Center Foundation, a 501(c)(3) non-profit organization. Its mission is to expand Houston’s reputation as a world-class cultural center by providing a premier performing arts facility, fostering accessibility to the performing arts and promoting arts education, with an emphasis on musical theater. The complex houses two performance chambers, an award-winning restaurant, and an 800 car capacity on-premise parking garage. Built entirely with private money and then gifted to the City of Houston, the Foundation operates the Hobby Center for the Performing Arts without municipal or taxpayer operating support. Please visit TheHobbyCenter.org.

BROADWAY ACROSS AMERICA is part of the Key Brand Entertainment family of companies, which includes Broadway.com and is operated by John Gore (Owner & CEO). BAA is the foremost presenter of first-class touring musicals and plays in North America, operating in 40 markets. As a leading Broadway producer, BAA is dedicated to the development and production of new and diverse theatre. Current/upcoming productions include Beautiful, Bullets Over Broadway, Million Dollar Quartet and Pippin. Past productions include Hairspray, How to Succeed in Business Without Really Trying, Memphis, Promises, Promises, The Producers and War Horse. Broadway.com is the premier theater website for news, exclusive content and ticket sales. For more information please visit BroadwayAcrossAmerica.com and Broadway.com.