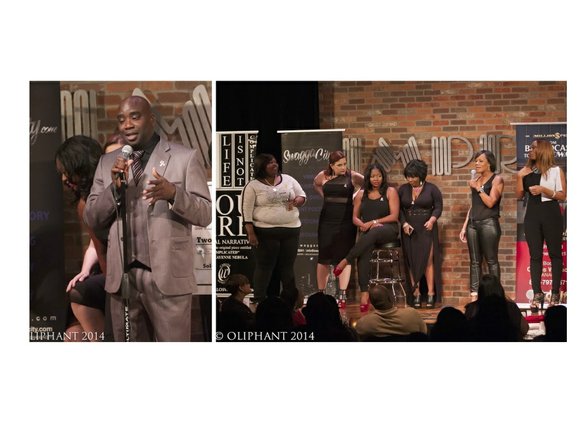 October is Breast Cancer Awareness Month, as if breast cancer only occurs in October. However, the importance of this month is to heighten women’s knowledge of their risk of developing breast cancer and what they can do to detect it early. It is even more important for African American women who have a higher mortality rate, especially in Houston where four times or more African American women dies from breast cancer as white women. So to have five of Houston’s hottest female comics join forces in honor of National Breast Cancer Awareness Month, especially when four of them were African American, it was had this health reporter take it wife on a midweek date to see the show entitled “Men All Pause,” a play on the word “menopause.” For a reproductive endocrinology, the word means basically referring to the end of woman reproductive life. However, I learned that in the entertainment business, it refers to period in a comedienne’s life where her talent peaks and she displays hot flashes of comedic brilliance, and these comediennes were brilliant. The only drawback was the overall lack of the theme of breast cancer awareness. Again, this is not to say that the night was not quite enjoyable. But as I told the produce of the event, Carlos Wallace, for this health reporter, it was have been the cherry on top if had occurred.

However, what shined through was the performance of Crystal Powell, a Texas native, who has performed nationwide, appearing on BET show “Lincoln Heights” and in feature film “Ball Don’t Lie” directed by Nick Cannon. What came through was Crystal personal experience with breast cancer. Although her experience could have been a downer, Crystal was able to wrap it into her comic routine where she had the audience in stitches, but still getting her message across, that mammography saves lives. She talked her fears in getting a mammography, having her boobs sneezed to they were flat as a pancake. As she said, “I was fearful but also empowered by the mammogram process,” she said. “Although breast cancer affects a small percentage of men, the rates for women are higher, so it’s a sisterhood. Laughter can be a powerful medicine; you have to laugh to keep from crying sometimes.” What made Crystal get a mammogram and join in the effort for the night was the fact that sister-in-law had a double mastectomy following a breast cancer diagnosis. I also found out during the interview that not only is there an issue of cancer is her immediate family, but cardiovascular disease as well. Her mother dies for a heart attack. So she is on this crusade to give back. As I mentioned to her, very few African American professionals in the entertainment industry are willing to share their health history, but included in their careers, especially actors or comedienne.

In talking to Carlos Wallace, the producer of the event, I found that he shared the same passion. During our discussion I also found that Carlos parents died at an early age for chronic diseases that could have been treated very easily if caught early. As he said, you can't get the message out too early, and I am in a position where I can give back. So it is now wonder that his company is called Sol-Caritas. “Sol” in Latin means elite, while Caritas means giving or charitable. So together they form the concept of “elite giving. As Carlos said “ultimately, it's about giving back to the community, to education business and more importantly to you, the people who helps his company thrive. And it was the connection that came through all of the performances. However, what was shocking is what also mentioned to me. As he said, each month they support a charity. However, this month several of the foundations he approached about donating the proceeds of the event turned him down. One foundation told him that the amount he could guarantee was not enough and the other did not fill out the paperwork in time. I found this quite strange, but fortunately for Carlos, he was able to find Ana’s Angels who were more than willing to accept the money.

In closing, let me say that the evening at the IMPROV was great. And if you have a chance to catch any one of these comediennes, Crystal Powell, Liz Faublas, Kiana Dancie, Kristin Lindner, Jennifer Jermany, and Brandy Adams, please do so, they are all great.