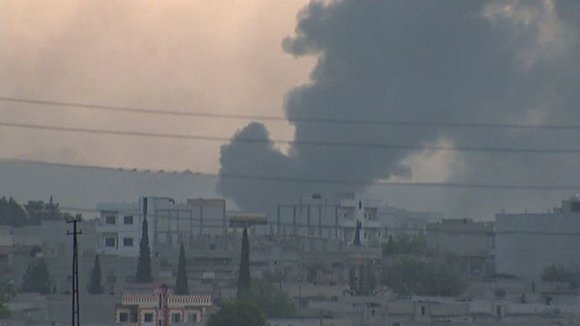 GAZIANTEP, Turkey (CNN) -- Kurdish fighters from Iraq will enter the besieged Syrian border city of Kobani this week to reinforce fellow Kurds who are defending against ISIS, a Peshmerga general told CNN on Tuesday.

"The Peshmerga have been ready for a few days, then had logistical problems, but they no longer do," Brig. Gen. Halgurd Hikmat said of the Iraqi Kurdish forces. "They will possibly be leaving today or tomorrow."

He added that "we now have an agreement with Turkey on this."

Another source -- an official with the Ministry of Peshmerga, effectively the defense ministry for the semiautonomous Kurdistan Regional Government in northern Iraq -- said 161 Peshmerga fighters were making the trip.

The troops have weapons "that will be of good help to our brothers in Kobani," said the official, who spoke on condition of anonymity.

The Peshmerga militia generally defends the Kurdish region in northern Iraq and has battled ISIS in that nation.

Turkish officials were not immediately available to comment. But Turkey has previously said it will allow the Peshmerga to pass through its territory into Syria to join the fight for Kobani, which lies on the Syrian-Turkish border.

Kobani, known in Arabic as Ayan al-Arab, is a largely Kurdish town defended by a Kurdish-Syrian militia.

With ISIS controlling the Syrian land surrounding Kobani, the Peshmerga's easiest path into Kobani is through Turkey.

Hikmat would not confirm how the Kurdish fighters from Iraq would join the Kurdish defenders in Kobani but said they would bring weapons and would participate in the fighting.

The weapons would be Saddam Hussein-era gear collected in Iraq, not new coalition armaments, Hikmat added.

ISIS, or the Islamic State in Iraq and Syria, captured portions of Syria and Iraq this year in its bid to establish what it says is an independent Islamic nation. ISIS began attacking Kobani in September.

The Ministry of Peshmerga official also said Tuesday that the Peshmerga would be in Kobani on Tuesday night or Wednesday morning.

The Syrian Kurdish fighters, part of the People's Protection Units, or YPG, have ties to the Kurdistan Workers' Party, or PKK, which has fought a 30-year guerrilla war against the government of Turkey, where about 20% of the population are Kurds.

Turkey, the European Union and United States consider the PKK a terrorist organization.

Earlier this month, Turkish President Recep Tayyip Erdogan said both the Syrian Kurdish and ISIS militants were "terrorists." The Turkish government also has bristled at the United States' efforts to parachute weapons, ammunition and medicine to YPG fighters.

But while Turkey did nothing to intervene in Kobani, Kurds protested in Turkish streets. More than 30 people were killed in cities around Turkey this month as ethnic Kurds clashed with Islamist and nationalist groups as well as Turkish police.

Turkey announced October 20 that it would allow Iraqi Peshmerga to travel into Kobani through Turkey.