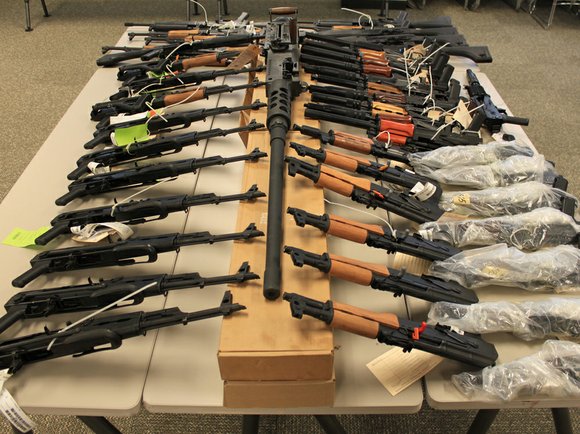 Facts: An estimated 1,400 weapons were lost by the ATF in Mexico. Two of the missing weapons linked to the operation turned up at the Arizona murder scene of United States Border Patrol agent Brian Terry.

Whistle-blowing leads to a Congressional investigation by the Senate Judiciary Committee and the House Oversight and Government Reform Committee, and Attorney General Eric Holder is cited for contempt.

Operation Fast and Furious was one of the operations under Project Gunrunner, part of the Department of Justice's broader Southwest Border Initiative, an "inter-agency effort to combat Mexico-based trafficking groups." (DOJ)

"Straw purchasers (also called straw buyers) buy firearms on behalf of others without disclosing that fact on the forms required by the Bureau of Alcohol, Tobacco and Firearms." (DOJ)

Operation Fast and Furious was not the first "gun walking" investigation by ATF; it was preceded by Operation Wide Receiver, which began in 2006.

October 2009 - Operation Fast and Furious begins, based on a review of Project Gunrunner by the ATF Organized Crime Drug Enforcement Task Force (OCDETF).

January 2010 - Bureau of Alcohol, Tobacco, Firearms agents tell the staff of Senator Charles Grassley (R-Iowa), member of the Senate Judiciary Committee, that the ATF allowed straw buyer Jaime Avila to make repeated purchases of guns after his name had been entered into a "suspect person database" on January 13, 2009.

December 14, 2011 - Border patrol agent Brian Terry is killed in the Arizona desert, and two weapons the ATF allowed to be purchased earlier in 2010 by purported "straw buyer" Jaime Avila are found near the shooting scene. It is unknown whether any of the guns were used as the murder weapon.

January 25, 2011 - The Department of Justice announces the end of Operation Fast and Furious, with the indictments of 34 drug and firearm trafficking suspects.

April 1, 2011 - Acting Director Melson is issued a subpoena from the House Oversight and Government Reform Committee.

May 3, 2011 - Attorney General Eric Holder testifies for the first time before the House Judiciary Committee that he had first heard of Operation Fast and Furious only over the past few weeks.

June 2011 - Whistleblowers testify before the House Oversight committee. ATF agent John Dodson tells lawmakers, "I cannot begin to think how the risk of letting guns fall into the hands of known criminals could possibly advance any legitimate law enforcement interest."

August 30, 2011 - Melson is reassigned to the Justice Department, and is replaced by B. Todd Jones.

October 2011 - Investigators uncover memos indicating Attorney General Holder had known about Operation Fast and Furious for close to a year, not a few weeks as he had stated in May 2011.

November 7, 2011 - A federal grand jury in the District of Arizona hands up an 11-count indictment. It alleges that on December 14, 2010, five of the defendants (Manuel Osorio-Arellanes, Jesus Rosario Favela-Astorga, Ivan Soto-Barraza, Heraclio Osorio-Arellanes and Lionel Portillo-Meza) were involved in a firefight with Border Patrol agents during which Terry was fatally shot. The men are charged with first-degree murder, second-degree murder, conspiracy to interfere with commerce by robbery, attempted interference with commerce by robbery, carrying and using a firearm during a crime of violence, assault on a federal officer and possession of a firearm by a prohibited person. The indictment is unsealed on July 9th, 2012.

November 8, 2011 - Attorney General Holder testifies before the Senate Judiciary Committee that, "this operation was flawed in concept, as well as in execution."

February 2, 2012 - Attorney General Holder testifies before the House Oversight and Government Reform Committee that firings and charges against Justice Department officials who oversaw Fast and Furious are likely to come in the next six months. He also denies any cover-up.

June 12, 2012 - Attorney General Holder testifies before the U.S. Senate Committee on the Judiciary, and rejects calls for his resignation.

June 20, 2012 - The House Oversight and Government Reform Committee recommends that Attorney General Holder be cited for contempt of Congress for failing to turn over documents relating to the Fast and Furious operation.

June 28, 2012 - The House of Representatives votes 255-67 to hold Holder in criminal contempt. This is the first time in American history that the head of the Justice Department has been held in contempt by Congress.

July 31, 2012 - The first of a three-part joint staff Congressional report is released, Fast and Furious: Anatomy of a Failed Operation, which lays blame for the failed gun-running probe on Acting ATF Director Kenneth Melson and Deputy Director William Hoover.

December 13, 2012 - Jaime Avila is sentenced to 57 months in prison for his role in buying weapons that were found at the site of the killing of patrol agent Brian A. Terry.

June 17, 2014 - Lionel Portillo Meza, a suspect in the death of Border Patrol Agent Brian Terry, is extradited from Mexico to the U.S.