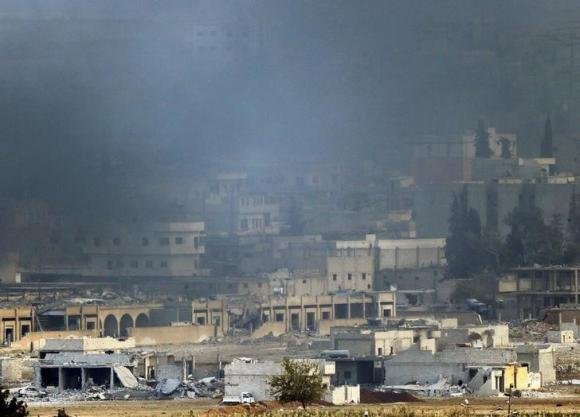 (CNN) -- Kurdish fighters from Iraq have finally arrived in Kobani in northern Syria to reinforce Syrian Kurds in the battle against ISIS for control of the town.

A Kurdish activist in Kobani said late Friday he saw more than 100 Kurdish fighters known as Peshmerga cross over the Turkish border with their vehicles to the embattled city's west, near a key hill called Tal Shair.

Another witness said he saw a large convoy of armed vehicles pass his house, headed toward the unofficial border crossing on the city's western side Friday evening. They were accompanied by Turkish military, as they drove on the Turkish side, he said.

This is the largest reported crossing of reinforcements to help the the Syrian Kurds defending the besieged Kobani. It's unclear whether more help is on the way.

ISIS, the Sunni Muslim extremist militant group, has been fighting to take Kobani for about six weeks, hoping to add it to the territory it already captured in parts of Syria and Iraq for what it calls its new independent Islamic nation.

Word of the Peshmerga's arrival follows complaints from Syrian Kurds, accusing Turkey of causing delays in the fighters' arrival. The Peshmerga were supoosed to arrive Thursday night or Friday morning, according to Polat Can, spokesman for Syrian Kurdish fighters, part of the People's Protection Units, or YPG.

"We do not know why it is delayed. We think the delay is caused by Turkey," Can said Friday morning.

"ISIS has been focusing its attacks on the border gate for the past five days to prevent Peshmerga and other support from coming, but they have not made progress. We have taken back some areas," Can added.

Syria has been embroiled in a three-year civil war, with government troops battling ISIS and other rebels elsewhere, leaving Kobani's ethnic Kurds to defend the city, with U.S. airstrikes -- part of a larger U.S.-led coalition effort against ISIS in the region -- intermittently taking out ISIS targets in the area.

Meantime, the airstrikes against those targets continued Thursday and Friday as part of Operation Inherent Resolve with four more carried out in Syria and Iraq, Central Command said in a Facebook post.