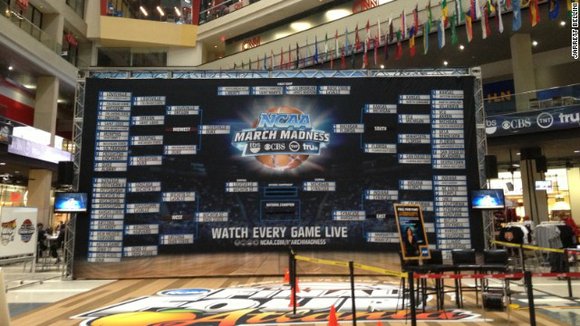 April 4-April 6, 2015 - The NCAA Final Four will be hosted in Indianapolis, Indiana at Lucas Oil Stadium.

The 10-member selection committee, comprised of athletic directors and conference commissioners, is responsible for selecting the 36 at-large teams, seeding (or ranking) all 68 teams and placing them in one of four regions within the bracket.

The selection process is based on a number of factors including win-loss record, strength of schedule and Rating Percentage Index (RPI) data.

Other Facts: The single-elimination tournament is nicknamed "March Madness" or "The Big Dance."

The "First Four" are the four first-round games. Two games match number 16 seeds against each other, and the other two games feature the last four at-large teams selected into the tournament. The winners advance to the second round.

Each of the four regions consists of 16 teams that are seeded number 1 to number 16. In the second round, teams are paired according to seed. The number 1 seed faces number 16, number 2 faces number 15, number 3 faces number 14, and so forth.

The sixteen teams that advance beyond their second and third-round games are referred to as the "Sweet Sixteen." The remaining eight teams are called the "Elite Eight," and the last four teams are the "Final Four."

An underdog or lower-seeded team that advances throughout the tournament is often referred to as a "Cinderella" team.

UCLA has won the most NCAA Men's Basketball Tournaments - 11.

The average cost of a 30-second commercial during a tournament game in 2013 was $1.42 million.

1954 - The tournament final is broadcast live nationwide for the first time.

2005 - College Sports Television begins a two-year agreement with CBS Sportsline.com and the NCAA for exclusive video streaming rights on CSTV.com for out-of-market game coverage. CSTV pays CBS $3 million for the rights and expects to be profitable in the first year.

March 25, 2010 - In an opinion piece on ESPN.com U.S. Secretary of Education Arne Duncan proposes that collegiate "teams that graduate fewer than 40 percent of their players should be ineligible for postseason competition and honors."

April 22, 2010 - In addition to expanding the men's tournament basketball field to 68 teams from 65, the NCAA announces a 14-year, $10.8 billion television rights deal with CBS and Turner Sports. The deal, which goes into effect in 2011, marks the first time that each game will be televised nationally.

For more information go to http://www.cnn.om