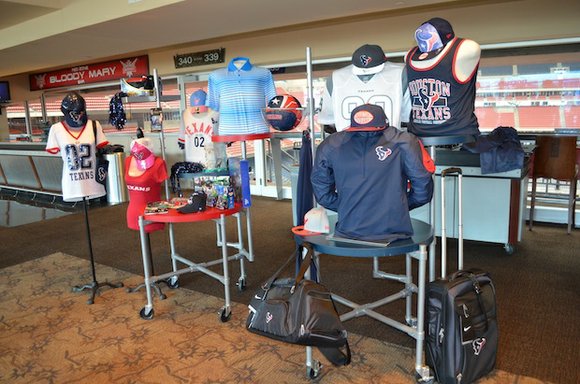 Houston Texans fans now have more variety to show their pride for the hometown team with new gear found at the shops located inside the NRG Stadium opened on gameday.

The Go Texan Store gets a bit of a face lift with a new opening that resembles the large bull head the players run out of on gameday. This will probably be a popular photo opp for fans.

Women get special attention in the shop created just for them. The Battle Red Ladies Boutique on the main concourse in section 119 features NRG exclusive Texans branded items with the female in mind. 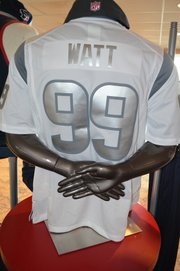 For the Texans fan that has everything, why not get a customize jersey. Now available at The Endzone Store, fans can create a jersey with the name and number of their choice. In addition new items are rolling out this year including a limited edition J.J. Watt platinum jersey. The white jersey with silver lettering is great way to show your support for the Texans’ $99 million dollar man. Other new items include Victoria’s Secrets “Pink replica jerseys, TORO theme items, women’s sequined caps, men’s fitted caps, and OYO Sportstoys.

Fans will now get to see players’ fashion sense with the new Player Inspired line. Houston Texans players will design their own product lines. Kareem Jackson Fly Guy will be the very Houston Texans to debut his line coming out September 9th.