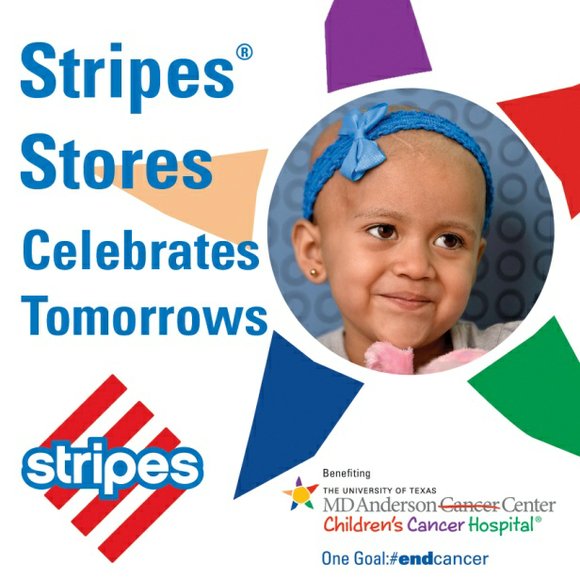 The campaign goal of $500,000 will help save kids' lives by providing more effective and safer cancer treatments, keep kids in school during treatments and fund engaging programs for kids with cancer. One hundred percent of the funds raised will go to these programs, and the donation will be matched dollar for dollar by the James B. and Lois R. Archer Charitable Foundation which will truly magnify the impact of every dollar. Stripes customers will be able to donate at all Stripes locations during the campaign, which will run from September 1- 28.

"MD Anderson is the number one cancer treatment center in the world conducting significantly more clinical research trials than any other teaching hospital," said Sam L. Susser, Chairman of the Board of Directors and Chief Executive Officer of Susser Holdings Corporation (parent company of Stripes LLC). "We are honored to launch Stripes' 'Celebrates Tomorrows' as MD Anderson's first in-store, pin-up fundraising campaign. Our customers and employees have shown their generosity in the past and we hope they will embrace this remarkable program."

Stripes team members are committed to raising funds and awareness for MD Anderson Children's Cancer Hospital as cancer is the leading cause of death in children suffering from diseases. Customers will be asked to help children with cancer by purchasing a $1 pin-up paper icon. Participating customers will receive coupons for a free 12 ounce Slush Monkey® and a buy-one-get-one free Smokin' Barrel® Snack Co. Peanuts or Trail Mix snack with their donation.

"Since MD Anderson opened its doors more than 70 years ago, it has successfully taken care of children. But we need better and newer therapies. Cure rates in many pediatric cancers have not improved in more than 20 years," said Eugenie Kleinerman, M.D., Professor and Head of the Division of Pediatrics, MD Anderson Children's Cancer Hospital. "We are proud to align with Stripes, an organization that encourages donations to help advance cancer treatment and care for children and young adults."

Stripes will also host campaign kick-off events in seven Texas cities. The entire community is invited to paint a red line (strike) through the word cancer emblazoned outside of designated Stripes locations. Customers will able be to write tributes and words of encouragement in honor of their loved ones during the kick-off events. The Houston event kicked off on September 2nd.

Cancer is the leading cause of death by disease in children and adolescents[i], yet funding for pediatric cancer research falls far below that for adult cancers. Stepping into this void, Stripes® Convenience Stores has launched a multistate campaign aimed at raising more than $1 million in one month for The University of Texas MD Anderson Children’s Cancer Hospital. Please join with us by sharing information about this meaningful campaign.

For every dollar donation at more than 650 store locations in Texas, Oklahoma and New Mexico during Pediatric Cancer Awareness Month in September, customers will receive a point-of-purchase mobile to sign and display, as well as double coupons for free in-store items. In addition, the James B. and Lois R. Archer Charitable Foundation will match all donations dollar for dollar. One hundred percent of donations from the Stripes® Stores Celebrates Tomorrows campaign will go directly to helping kids with cancer (see sidebar). Already, the campaign has generated nearly $430,000.

“Every dollar counts when saving the lives of children with cancer,” says Eugenie S. Kleinerman, M.D., head of MD Anderson Children’s Cancer Hospital. “Since opening our doors in 1941, MD Anderson has saved countless lives, cared for children with grave diagnoses and worked to ease the burden of cancer. But cure rates in many pediatric cancers have not improved in more than 20 years. This campaign will help change how kids are treated for numerous cancers, while maintaining their daily routine through education and recreation programs.”

Katarina, age 15, was a straight-A student when she was diagnosed with Ewing’s Sarcoma in 2013. The school at MD Anderson Children’s Cancer Hospital offered her a retreat from her cancer and the help she needed to maintain her strong grades. Now in remission, she dreams of becoming an oncologist.

Another patient, Karly, a 20-year old survivor, was enthusiastic to learn about how this partnership would help children like her at the Children’s Cancer Hospital. “I hope wherever there’s a Stripes store, no matter how far from Houston and MD Anderson, people realize that their donation could be helping their neighbor or their child’s school friend,” said the Seminole, TX native and aspiring child psychologist.

Headquartered in Corpus Christi, Texas, Susser Holdings Corporation (NYSE: SUSS) is a third-generation family led business with over 1,240 company-operated or contracted locations. Susser Holdings is the parent company of Stripes® Convenience Stores and owns the general partner of Susser Petroleum Partners, LP. (NYSE: SUSP). Susser Holdings ranked No. 439 on the FORTUNE 500® in 2014. The Company operates over 640 convenience stores in Texas, New Mexico and Oklahoma, over 590 under the Stripes® banner and 47 under the Sac-N-Pac banner. Restaurant service is available in over 410 of its stores, primarily under the proprietary Laredo Taco Company® brand. The wholesale division distributes approximately 1.7 billion gallons of motor fuel annually to Stripes® stores, independently operated consignment locations, convenience stores and retail fuel outlets operated by independent operators and other commercial customers in Texas, New Mexico, Oklahoma, and Louisiana. For more information about Stripes® Convenience Stores visit www.stripesstores.com.

MD Anderson is one of the world's most respected centers focused on cancer patient care, research, education and prevention. For the past 25 years, MD Anderson has ranked as one of the nation's top two cancer centers in U.S. News & World Report's annual "Best Hospitals" survey. MD Anderson Children's Cancer Hospital brings hope to families, offering the most advanced childhood cancer treatments in a kid-friendly environment. Its partnership with Stripes® is its first cause-based retail effort in its history.