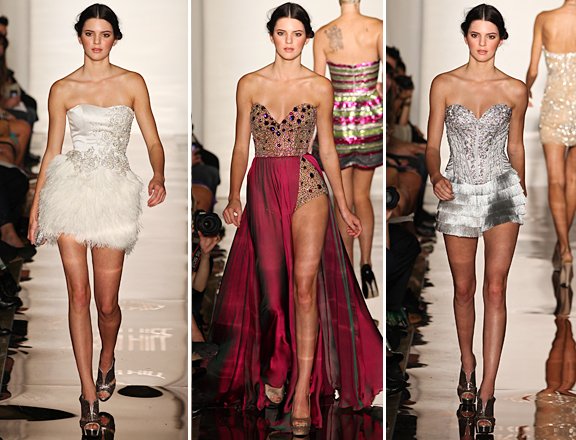 All eyes shifted toward the beginning of the runway when a dark-haired model strutted out in a star-spangled red bikini to a fusillade of flashbulbs at Tommy Hilfiger's New York Fashion Week show on Monday.

She fit right in at nearly 5'11" tall with a svelte frame. But despite adhering to the anonymous runway model aesthetic, Kendall Jenner tends to stand out.

She's on a first-name basis with millions.

The teen, who appears alongside her paparazzi-favorite family in "Keeping Up with Kardashians," is trying to find her own footing in the high-fashion world without her polarizing siblings and parents.

"You just don't know how (casting directors) are going to react to it. It could be like 'Oh, just another reality TV star coming in, trying to be something,' " Jenner said. "This is what I want to do. ... This is my career. This is what I wanted to be."

During this New York Fashion Week, which ends Thursday, Jenner has made enviable strides by modeling for Donna Karan, Tommy Hilfiger and Diane von Furstenberg. In von Furstenberg's show, she walked behind legendary supermodel Naomi Campbell and Victoria's Secret Angel Candice Swanepoel, both of whom Jenner says she looks up to.

This year, she walked for high-fashion brands overseas like Chanel, Giles and Givenchy.

"When I started, I had no idea how this was going to turn out," she said. "It's still so surreal that I've walked in shows like Givenchy and Chanel. It's ridiculous."

Like anything Kardashian-related, Jenner's presence in this world has not come without controversy: Where models are dodging street style photographers, she's dodging paparazzi and hit pieces in the media about the distraction her presence brings.

Compared with some of her high-fashion counterparts who can walk upwards of 20 runways during the weeklong event before heading to London, Paris and Milan, Jenner is still a fledgling in her second season, with three shows thus far. Despite it all, her name does garner press.

Before Fashion Week started, she decided to omit her last name from her casting card, which is sent out to runway suitors from her agency, The Society Management.

"I just felt like I didn't want a last name to help me in any way," Jenner said, making it clear that the decision is not a slight to her family. "Whenever I went into a casting, I didn't need any special treatment."

But, to play the devil-in-Prada's advocate, she also credits growing up in front of a lens with helping her improve her modeling skills. Her mother, Kris Jenner, is a business manager and executive producer for her family's show, and her father is Olympic decathlete Bruce Jenner.

"Whether it was a big TV camera or a little picture camera, I feel like I've always been in front of a camera," Jenner said.

Modeling is an easy transition, she says, and something she's wanted to do since she was a young girl.

In her Fashion Week debut in February, she made a splash with a chest-baring look for Marc Jacobs, which Jenner describes as a " 'hello world' kind of moment."

It's a far cry from the shy child she used to be.

"When I was a kid, I couldn't have a slumber party for one night without crying myself to sleep and telling my dad to pick me up at 10 o'clock at night," Jenner said.

Given her exposure, it's easy to forget she's a California girl, straight out of high school.

"I was so terrified to get in a cab the first time I was here," Jenner admitted.

As for what's coming up for the ingenue, Jenner shares two words familiar to any TV watcher: "Stay tuned."