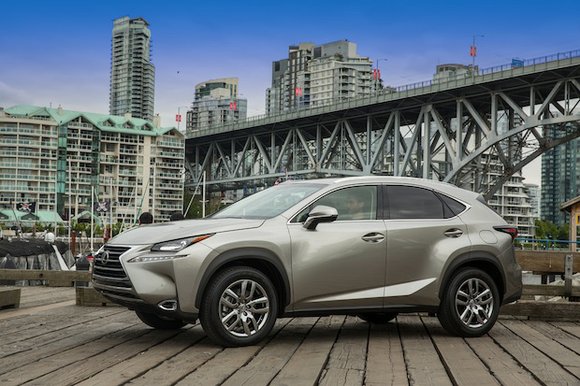 DETROIT – When it comes to the 2015 Lexus NX crossover, there’s good news and then there is a cautionary yellow warning light.

The good news is obviously there is an all new Lexus coming to market in November. Although Lexus comes late to the compact entry level luxury crossover market, in the NX it has a very credible entry.

The NX had the angled styling cues of Lexus’ sporty IS sedan. There was a sharply raked tailgate, the spindle grille and a choice of either 17-inch or 18-inch wheels. It used LED headlight and taillamps.

Each door handle was illuminated as the driver approached and the LEDs double as puddle lights as they hit the ground beneath each door. Even though the center-stack, which angled out from the dash, was the focal point, Lexus interior designers still managed to give a horizontal look to the instrument panel.

And though the interior was very angular, the soft touch surfaces of the layered dash leant sophistication to the inside of the Lexus NX. We got in the back seats and there was a good bit of legroom as well as headroom. The Lexus NX was quite capable of transporting four adult passengers in comfort.

The gasoline version of the NX will be powered by a 2.0-liter twin-scroll turbocharged four cylinder engine that makes 235 horsepower and 258 pound-feet of torque. It will be mated to a six-speed automatic transmission.

The Lexus NX 300h was powered by a 2.5-liter Atkinson four-cylinder engine that made 154 horsepower and 152 pound-feet of torque. It was mated to a continuously variable transmission (CVT).

We had the chance to briefly test drive all-three versions of the 2015 Lexus NX. The NX 200t F Sport rode firm because of its sport-tuned suspension and its response to driver input was a tad quicker because of a more aggressive gear differential on our all-wheel-drive model with paddle shifters.

At low speeds it was hard to differentiate the Lexus NX 300h from its gasoline powered stable mates. But press down on the accelerator and the hybrid was distinctly slower. Zero to 60 mph time will be 9.1 seconds for either the front-wheel-drive or AWD versions of the hybrid. Top speed was 112 mph.

We don’t know if the NX is the first but it is one of the view hybrids with an AWD version. The NX 300h’s two electric motors will be used to turn the rear wheels when AWD is needed.

Like both AWD versions of the gasoline engine powered NX, the hybrid AWD will be 100 percent front-wheel drive under normal driving conditions. But both systems will be capable of sending 50 percent of their torque to the rear wheels when needed. Both can also be locked into AWD mode and stay there up to 25 mph.

The Lexus NX 200t was pretty good. Handling was precise, the suspension was firm and the vehicle’s engine seemed to be a little quieter than then F Sport under hard acceleration but it was the same engine.

We did try the sport setting on the ride mode selector and the Lexus NX seemed to get a little tighter; it was probably that throttle response got quicker and the power steering assist stiffened. All the versions of the 2015 Lexus NX are viable entrants into the segment.

The yellow warning light is that Lexus would be ill advised to expect consumers to buy the NX simply because it is a Lexus. It has set a lofty sales number but direct competitors have excellent entrants in the compact luxury crossover segment.

In other words, Lexus will have to advertise and market the 2015 Lexus NX aggressively. They’ve got a good product but they will need to put the advertising and market dollars behind it to hit their sales goal.