Joe Sample: One of the Coolest Guys in Music 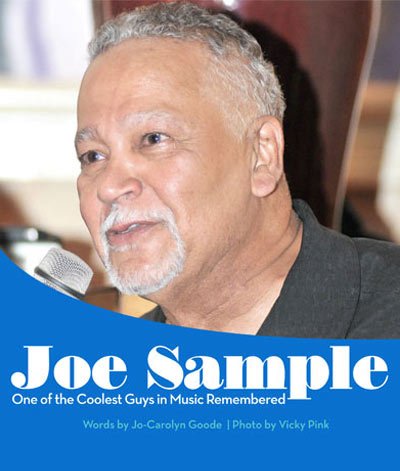 Though he rose to fame some 50 years ago Joe Sample was still one of the coolest guys in music because he loved all genres of music. That love of music allowed him to effortlessly blend funk, blues, jazz, gospel, Latin and Zydeco. On Friday, September 12th the man known to electrify music passed from this world to the next. Joe Sample died at the age of 75 in Houston.

Born Joseph Leslie Sample on February 1, 1939, in Houston. Joe was one of five children. It was as a child when Joe fell in love with music. One of his favorites was Ray Charles on the electric piano, which would be a great inspiration later in Joe’s life. Traveling musicians were always in his home since his other brother played in the Navy band and musicians would stop by his house to get some of his mom’s good Creole cooking. A young Joe also started his love affair with the piano at 5 years old as a student of organist and pianist Curtis Mayo.

While at Phills Wheatley High School Joe’s musical talent really blossomed when he hooked up with Wilton Felder and Nesbert “Stix” Hooper. With their piano, saxophone and drum the three established the group called the Swingsters. Wayne Henderson, Henry Wilson, and Hubert Laws would join the trio after meeting Joe on the campus of Texas Southern University when he studied music. New members meant a new name so the group became the Modern Jazz Sextet. The six friends had quite a following in Houston but it was just the beginning until they made the big move.

Following their dreams, the Modern Jazz Sextet became the Jazz Crusaders as four of them moved from Houston to Los Angeles. Finding success quickly Joe, Wilton, Stix, and Wayne recorded their first recording, “Freedom Sounds,” in 1961. Each man talented in their own way and it was their unique sounds and styles combined that capture the sound of the of the day, hard pop, which is an infusion in jazz music of rhythm and blues, gospel music, and blues.

Although the group found great success they wanted to test the waters as solo artists. Joe grabbed his opportunity in 1969 on the recording of “Fancy Dance,” where he was the featured pianist. As the time and musical interest of the public change the Jazz Crusaders adapted by dropping jazz from their group name and modernizing their sound. Sample also was gaining greater success as a solo artist as a studio musician. If you love Marvin Gaye’s “What’s Going On,” Tina Turner’s “Private Dancer,” or Joni Mitchell’s “Court and Spark” then you are a fan of Joe. His days as a studio musician allowed him to work with B. B. King, Steely Dan, Anita Baker, Lalah Hathaway, and many more. But Joe’s music wasn’t just in the realm of jazz it crossed over to hip-hop. The piano accompanied in Tupac Shakur’s “Dear Mama” really makes that track amazing and yes, that’s Joe’s music.

The piano was cool for Joe but what made him the coolest cat was when he tickled on the electric keyboard. He adapted to the instrument before it became widely popular making him a pioneer of electric music in jazz. His skills helped the Crusaders with the crossover into more modernize music for them to make such hits as “Street Life” featuring Randy Crawford and be the first instrumental band to open up for the Rolling Stones tour.

Joe was a constant musician always working and entertaining. Before his death Joe had reunited with the remaining Crusades and started yet another ensemble known as the Creole Joe Band that honed in on his Creole roots. The band played lively Louisiana style Zydeco music. Joe also was working on a collaboration with Jonatha Brooke and Marc Mantell for the musical “Quadroon” that had a reading this summer at The Ensemble Theatre.

Joe had a huge heart for music and even bigger heart for his community. When he moved back to Houston he saw how run down his old stomping grounds had gotten and decided to do something. He held a fundraising concert at Galveston’s Grand 1894 Opera House to benefit his childhood school, Our Mother of Mercy, and other inner city Catholic schools. From that first concert birth the Joe Sample Youth Organization, Inc. and the annual JSYO Henriette Delille Legacy Concert.

Joe once said of JSYO, “ I saw that something needed to be done and decided I couldn’t wait around while others talked.” In the first three years of JSYO, Joe and volunteers were able to raise over $150,000 for schools to replace out dated textbooks, heating system, playground equipment, and library furniture.

Despite two heart attacks and a bout with Epstein-Barr Joe kept trucking. It was music that fueled his soul with the love of his family. Sadly, although he put up a brave fight, Joe would succumb to complications of lung cancer. The music world has a lost a legendary pianist, keyboard player, and composer.

A public wake and viewing will be held for Joe on Friday, September 19, 2014 from 6:00-9:00pm at Our Mother of Mercy Church, 4000 Sumpter St., Houston, TX 77020. Joe will be funeralized and laid to rest in a private ceremony. In lieu of flowers, etc., the family asks to make donations to the Joe Sample Youth Organization, a 501 (c)(3) non-profit. Contributions can be made via paypal/credit card using the following link: www.paypal.com/cgi-bin/webscr?cmd=_s-xclick&hosted_button_id=QV5AUC3H6AGQL or via check to the following address: Joe Sample Youth Organization, P.O. Box 590254, Houston, TX 77259.