Oprah: Where Are They Now? Returns With All-New Episodes Beginning Sunday, October 5th at 9pm ET/PT On Own

Oprah Conducts One-on-One Interviews with Raven-Symoné, Singer Charice, Vivica A. Fox and Reunites the Cast of “A Different World” 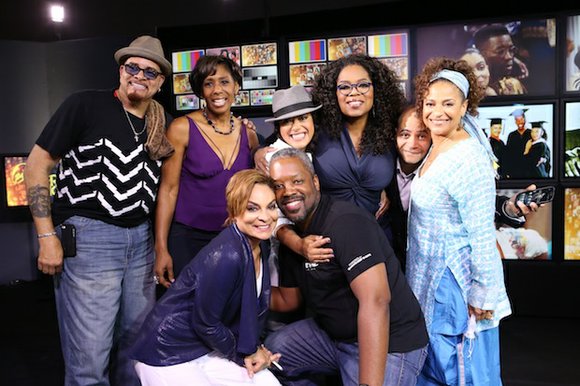 Chicago, IL- – The popular series "Oprah: Where Are They Now?" returns with all-new episodes, featuring some of the biggest newsmakers and most memorable “Oprah” show guests of all time, premiering Sunday, October 5 at 9:00 p.m. ET/PT on OWN: Oprah Winfrey Network.

Throughout the month of October, Oprah talks one-on-one with actress/singer Raven-Symoné, singer Charice, who found fame via YouTube and became a guest-star on “Glee,” and actress Vivica A. Fox. Other celebrity updates include Carmen Electra (“Baywatch”); singers Macy Gray and Jackie Evancho; “General Hospital” stars Maurice Benard, Finola Hughes and GH star and 70s teen idol, Jimmy McNichol; child star Peter Ostrum who left show business after his one starring role as Charlie Bucket in “Willy Wonka & The Chocolate Factory”; rock legend Paul Stanley of KISS; “Blossom’s” Jenna Von Oy; Janine Turner (“Northern Exposure”), and Shadoe Stevens (“American Top 40”). In addition, each episode features updates with some of the most compelling guests from the “Oprah” show’s 25 years on the air.

Plus, more than two decades after its debut, Oprah reunites the cast of the groundbreaking, hit television show “A Different World.” The cast reunion includes stars Jasmine Guy, Kadeem Hardison, Darryl M. Bell, Dawnn Lewis, Cree Summer, Sinbad, and Debbie Allen, sharing how they addressed important life issues in each episode and their favorite memories of six seasons together.

New episodes in October include:

Oprah sits down with Raven-Symoné for a candid conversation about her infamous Tweet in support of gay marriage. The “That’s So Raven” star, now all grown-up, talks candidly about her own sexuality and what it was like being in the public eye for so long as a child actress, beginning with “The Cosby Show.” Find out what she is doing now, plus updates with singer Jackie Evancho, who opens up about the shocking bullying she endured at the hands of schoolmates following her appearances on “America’s Got Talent”; "General Hospital” star Maurice Benard on his intense battle with bipolar disorder, and Jenna Von Oy from “Blossom.”

Oprah sits down for a candid conversation with 1990s Hollywood “It Girl,” actress Vivica A. Fox; plus, updates with actors Janine Turner (“Northern Exposure”), 7Os teen idol and "General Hospital" star Jimmy McNichol, and Peter Ostrum, whose only film role was Charlie Bucket in “Willy Wonka & The Chocolate Factory." More with “Oprah” show guests from our Hall of Fame and dramatic “Shlumpadinkas” makeovers.

Oprah welcomes Charice, the Filipina singer who rose to fame via YouTube who Oprah has called “the most talented girl in the world,” for a one-on-one interview with a surprising revelation. More celebrity updates include Carmen Electra, radio and TV personality Shadoe Stevens and singer Macy Gray; plus, Anastasia Soare, the Beverly Hills-based Eyebrow Queen, and Tenika Wilson, the transsexual who was in the car with Teddy Pendergrass during the tragic accident in 1982 that left the singer paralyzed from the chest down.

"Oprah: Where Are They Now" is executive produced by Harpo Studios' Jill Van Lokeren, Julie Simpson and Veronica Votypka.

For more information on "Oprah: Where Are They Now?" visit:

To join the conversation on social, use #WhereAreTheyNow @OWNtv

OWN: Oprah Winfrey Network is the first and only network named for, and inspired by, a single iconic leader. Oprah Winfrey¹s heart and creative instincts inform the brand – and the magnetism of the channel. Winfrey provides leadership in programming and attracts superstar talent to join her in primetime, building a global community of like-minded viewers and leading that community to connect on social media and beyond. OWN is a singular destination on cable. Depth with edge. Heart. Star power. Connection. And endless possibilities. OWN is a joint venture between Harpo, Inc. and Discovery Communications. The network debuted on January 1, 2011 and is available in 85 million homes. The venture also includes the award-winning digital platform Oprah.com. For more information, please visit www.oprah.com/own