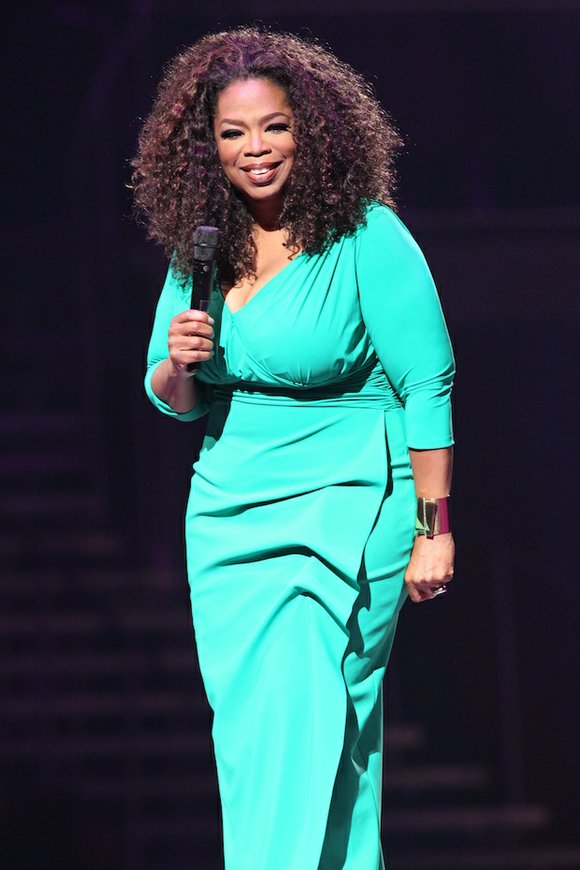 Oprah Winfrey captivates audiences on stage at "The Palace of Auburn Hills” in Auburn Hills, MI on Friday September 12, 2014. This was the second stop of Winfrey’s eight-city arena tour, “Oprah’s The Life You Want Weekend,” traveling throughout the U.S. this fall.

OPRAH: WHERE ARE THEY NOW?

“Oprah: Where Are They Now?” features updates on some of the biggest newsmakers and most memorable Oprah show guests of all time.

Oprah sits down with Raven-Symoné (“The Cosby Show”) for a candid conversation about her infamous Tweet in support of gay marriage that set tongues wagging about the “That’s So Raven” star's own sexuality, and who she is now as an adult woman after being in the public eye for so long as a child actress. Find out what she is doing now, plus updates with singer Jackie Evancho, who opens up about the shocking bullying she endured at the hands of schoolmates following her appearances on “America’s Got Talent.” Also "General Hospital” star Maurice Benard on his intense battle with bipolar disorder, and Jenna Von Oy from “Blossom.”

Oprah sits down for a candid conversation with 1990s Hollywood “It Girl,” actress Vivica A. Fox; plus updates with actors Janine Turner (“Northern Exposure”), 70s teen idol and “General Hospital” star Jimmy McNichol and Peter Ostrum, whose only film role was Charlie Bucket in “Willy Wonka & The Chocolate Factory;” “Oprah” show guests from our Hall of Fame, and dramatic “Shlumpadinkas” makeovers.

Oprah welcomes Charice, the Filipina singer who rose to fame via YouTube, and whom Oprah has called “the most talented girl in the world,” makes a surprising revelation; celebrity updates include Carmen Electra, radio and TV personality Shadoe Stevens and singer Macy Gray; plus Anastasia Soare, the Beverly Hills-based Eyebrow Queen, and Tenika Wilson, the transsexual who was in the car with Teddy Pendergrass during the tragic accident in 1982 that left the singer paralyzed from the chest down.

In the popular self-help series, bestselling author, spiritual life coach and television host Iyanla Vanzant goes behind closed doors to help people whose relationships and lives have broken down.

Iyanla helps a mother and daughter who are battling for the love of a young child.

Iyanla helps a woman overcome the burden of caring for her alcoholic sister.

Iyanla helps a woman whose obsession for beauty could cost her the relationships with her family and her life.

In the new season, Columbus, Ohio's first sextuplets, Josiah, Madison, Olivia, Issac, Rozonno Jr. and Elijah, aren't so little anymore. Inches taller and a whole lot more vocal and active, the kids are developing their own personalities, which means there are bigger tantrums...and even bigger adventures. Now that the kids are four years old, parents Mia and Ro need to expand the size of their home to fit their growing family. Conflicts arise as the couple, who don't always see eye-to-eye, learn to compromise when it comes to either investing in a new home or in their ever expanding family carpet cleaning business. While balancing the challenges of raising the unforgettable brood, from enrolling them in new activities and searching for preschools, the McGhees prove every step of the way that "it takes a village" when it comes to their unique family and that love can overcome any obstacle.

Ro decides to take the first step toward his dream of owning a restaurant by launching a food cart. Mia is having a difficult time with Madison's bad behavior and tries new techniques to get her wayward tot in line.

Mia and Ro take Josiah and Madison to the doctor over concerns that they're falling behind with their speech development. Ro introduces the sextuplets to sports with a master plan of forming "Team McGhee!”

After losing out on their dream house, Mia and Ro get a second chance with a new property, but a health scare for Mia casts a shadow over their good fortune.

The two-time Emmy award-winning series delivers a thought-provoking, eye-opening and inspiring block of programming designed to help viewers awaken to their best selves and discover a deeper connection to the world around them. The series features exclusive interviews and all-new conversations between Oprah Winfrey and top thinkers, authors, filmmakers and spiritual leaders. Exploring themes and issues including happiness, personal fulfillment, wellness, spirituality and conscious living. "Super Soul Sunday" presents an array of perspectives on what it means to be alive in today’s world.

Oprah is joined by bestselling author and Tibetan Buddhist nun Pema Chödrön for an uplifting conversation about her spiritual journey and how we can all move closer to living fuller, more conscious lives.

Oprah speaks with Madonna Badger who on Christmas Day 2011 lost her three daughters and parents in a tragic house fire. She talks about finding strength in the wake of the unthinkable and forging a spiritual connection to her children even after their tragic deaths.

Oprah speaks with bestselling author and spiritual teacher Marianne Williamson about the lessons she learned from her recent run for Congress, why she believes spirituality belongs in politics and the thrill of taking a leap of faith in her 60s.

“Help Desk” is an all-new series hosted by award-winning journalist and filmmaker Gotham Chopra, Deepak Chopra’s son, as he introduces today’s top thought leaders who bring their spiritual wisdom to the streets in different cities across the country, offering life-changing answers to hard-hitting questions about relationships, health, spirituality and personal transformation. These are challenging times and there is a deepening hunger among people for meaning and purpose. Where do they go for guidance? The simple truth is that spiritual advice has more impact when it’s given to real people who have real questions. So, that sparked an idea: set up a desk in a busy public place, sit down with today’s most celebrated spiritual teachers and let the public ask them whatever is on their mind.

From the Help Desk in San Francisco Caroline Myss, a five-time New York Times bestselling author and internationally renowned speaker, gives advice on how to discover your personal talents, overcome addictions and be more assertive in a work environment.

From the Help Desk in Long Beach, California, Dr. Michael Beckwith, bestselling author and founder of the Agape International Spiritual Center, gives advice on how to find fulfillment and deal with loss of a loved one.

From the Help Desk in Portland, Oregon, Cheryl Strayed, the bestselling author of “WILD” and Dear Sugar advice columnist, answers questions about how to move away from overwhelming fear, honor a loved one, and embark on new career path.

From the Help Desk in New York Gabrielle Bernstein, a next generation life coach and bestselling author of “May Cause Miracles” gives advice on how to find a career you are passionate about, deal with fear in relationships and overcome addiction.

IF LOVING YOU IS WRONG

“If Loving You Is Wrong” is the new dramatic series created for television by writer/director Tyler Perry. With a diverse cast and storylines ranging from heartfelt to scandalous, the sexy, sleek drama takes viewers into the lives of a group of husbands, wives and friends that live and love in the same middle class neighborhood. On the surface they are true-to-life, relatable people – raising children, working jobs, finding and maintaining romance – but just below the veneer of happiness, their lives are entangled by heartbreak, deceit and lies that threaten to destroy everything.

Alex (Amanda Clayon) is further along in her pregnancy than she originally thought.

Burger Fast is robbed and Natalie (April Parker Jones) accuses her son Joey (Matt Cook) of the crime. Also, Marcie (Heather Hemmens) finds out that her husband is having an affair with a woman named Peppa.

FOR BETTER OR WORSE

“For Better or Worse,” the popular comedy series from Tyler Perry about the ups and downs of dating and marriage, returns with all-new episodes that center on Angela’s (NAACP Image Award-nominated actress Tasha Smith) ongoing suspicions that her husband Marcus (Michael Jai White) is having an affair. Additionally, Richard (Kent Faulcon) and Keisha (Kiki Haynes) are working on relationship problems of their own, while Leslie (Crystle Stewart) and on-again-off-again boyfriend Joseph (Jason Olive) could be headed toward wedding bells. Meanwhile, Todd (Brad James) and Jennifer (Cocoa Brown) are each up to no good.

When Angela (Tasha Smith) barges into C-Sports Now, she discovers that Shawn actually thinks Todd is Marcus (Michael Jai White). Marcus realizes that Todd (Brad James) has been pretending to be the owner of C-Sports Now in order to win over Shawn. When Todd finds out that Shawn is pregnant with his baby, he acts cold and insensitive. Marcus warns Todd that if he doesn’t man up to his responsibilities and take care of the baby, he will be fired.

Keisha (Kiki Haynes) serves divorce papers to an unsuspecting Richard (Kent Faulcon). When Richard tells the guys how Keisha sent him off to work with a kiss, they suspect that she has moved out of the house. After Richard calls the security office of his subdivision their suspicions are confirmed. A heartbroken Richard leads the guys to believe that he has been preparing for this, but they know that Keisha’s actions have caught him by surprise.

When Richard (Kent Faulcon) doesn’t show up for work, Marcus (Michael Jai White) and Joseph (Jason Olive) are concerned. They go to Richard’s house to check up on him. When they arrive, they find that a Richard has chained down everything in his house. Marcus pleads with Richard to stop fighting Keisha (Kiki Haynes), but Richard refuses to concede. When Keisha enters the room, the tension is obvious. Marcus, Joseph and Todd are concerned that Keisha may actually become part owner of C-Sports Now.

Richard (Kent Faulcon) is in great spirits until Todd announces that Keisha (Kiki Haynes) has served Richard (Brad James) with a restraining order. Marcus (Michael Jai White) and Joseph (Jason Olive) soon discover that Richard has hired a tacky attorney to represent him. In order to protect their investment in C-Sports Now, Marcus enlists the help of the best attorney in the state. Using Richard as an example, the attorney warns Joseph to get a prenup before he marries Leslie (Crystel Stewart).

As Joseph (Jason Olive) is preparing a proposal for Leslie (Crystle Stewart), he keeps comparing himself to her ex, Chris. After consulting with Marcus (Michael Jai White) about his dilemma, Joseph contemplates his proposal.