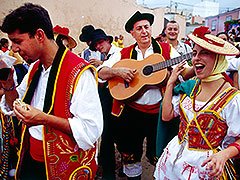 From mid-September through mid-October, America recognizes the contributions, culture, and heritage of Hispanic Americans.

Honoring 'The Day of the Race'

The celebration extends into October to mark "El Dia de la Raza," or "The Day of the Race" on October 12. "El Dia de la Raza" is observed throughout most of Mexico and Latin America. The day celebrates the many nationalities—a people having a common beginning, tradition, or language—that are present in the history of Mexico, Central America, and South America. These nationalities include Native Americans such as the Mayas, Aztecs and Incas; and European nationalities such as Spanish, Portuguese, and French.

Hispanic people were among the earliest European settlers in the New World, what is today the United States. Hispanic Americans have roots in Europe, Africa, and South and Central America and close cultural ties to Mexico, the Caribbean, Central America, South America, and Spain.

Today, the Hispanic or Latino population in the U.S. is estimated at 50.5 million people. According to the U.S. Census (a study that tracks population growth), the country's Hispanic population grew by 43 percent from 2000 to 2010, making it the largest and the fastest growing minority group in the country.

From sports to government to entertainment and science, Hispanic Americans have played important roles in America's history, its values, and culture. They include Supreme Court Justice Sonia Sotomayor, baseball star Alex Rodriguez, actors George Lopez, journalist Geraldo Rivera, actresses America Ferrera and Selena Gomez, astronauts Michael Lopez-Alegria and Ellen Ochoa and authors Isabel Allende and Julia Alvarez. As of 2002, more than 63,000 people were on active duty in the Armed Forces according to the U.S. Census.