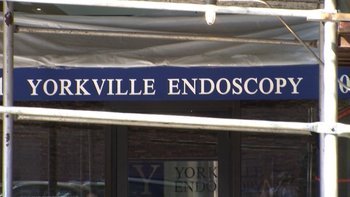 Joan Rivers, 81, died a week after an appointment at Yorkville Endoscopy in New York City, New York on August 28, 2014. CNN

By Alan Duke and Susan Candiotti

The doctor who began a biopsy on Joan Rivers' vocal cords before she suffered cardiac arrest last month has been identified by clinic staffers as Dr. Gwen Korovin, a source close to the death investigation said.

Korovin is the same doctor who a clinic staff member told investigators snapped a selfie in the procedure room while Rivers was under anesthesia on August 29, the source said.

Rivers, 81, died a week after suffering cardiac arrest during an appointment at Manhattan's Yorkville Endoscopy clinic.

Rivers' throat doctor is well known for helping an impressive list of celebrities with voice trouble. The list of famous patients who have sung her praises include actors Hugh Jackman and Nathan Lane and singers Celine Dion, Lady Gaga and Ariana Grande.

"I've always been fascinated by the human voice and music," Korovin, 55, is quoted telling the New York Daily News in a profile story last year.

Dr. Korovin's lawyer sent a statement to CNN Thursday in response to the reports:

"Gwen S. Korovin, M.D. is a highly experienced, board certified otolaryngologist. She maintains privileges at one of the city's most prestigious hospitals. She is respected and admired by her peers in the medical community and she is revered by her patients.

"For these reasons, neither Dr. Korovin nor her attorneys will have any public comment on recent press reports regarding her practice. We ask that the press please respect Dr. Korovin's personal and professional policy of not discussing her patients, as well as the privacy of her patients."

Korovin joined Rivers at her appointment on August 28 for an endoscopy procedure intended to diagnose why the comedian was suffering a sore and hoarse throat, a source close to the death investigation told CNN.

Korovin was only authorized to observe while another doctor, gastroenterologist Dr. Lawrence Cohen, performed the procedure, the source said. After Cohen, the clinic's medical director, finished his work, Korovin began a biopsy on Rivers, according to the source.

Investigators believe that Rivers' vocal cords began to swell during the allegedly unauthorized biopsy, cutting off the flow of oxygen to her lungs, which led to cardiac arrest on the morning of August 29, the source said.

Rivers was rushed by paramedics from Yorkville Endoscopy to New York's Mount Sinai Hospital a mile away, where she died a week later.

Korovin was not certified by Yorkville Endoscopy clinic, as required by New York health law, to perform procedures there and no prior consent form signed by Rivers authorizing a vocal cord biopsy were found by investigators, the source said.

It was unclear if Rivers had given verbal consent to the biopsy before being sedated for the endoscopy.

The endoscope was not the only camera used while Rivers was under anesthesia, according to the source. A clinic staff member told investigators that Rivers' doctor took a selfie photo in the procedure room, the source said.

The clinic is still open, although an accreditation group is calling for it to suspend procedures and surgeries, according to letters obtained by CNN. Patients were seen in the clinic's waiting room Wednesday.

The American Association for Accreditation of Ambulatory Surgery Facilities (AAAASF) sent representatives for an unscheduled visit to the clinic after hearing about Rivers' cardiac arrest, according to letters from the group.

The letters cited two "deficiencies" found by the representatives, declared the clinic to be in "immediate jeopardy" and placed it on "emergency suspension." The accreditation group said the clinic should stop procedures and surgeries "until accreditation questions are settled."

The clinic sent CNN a statement Wednesday night in response to questions about the accreditation association's letter putting the facility under "emergency suspension."

While the accreditation agency has no power to shut a clinic down, the state of New York does. State health investigators also found deficiencies in Rivers' treatment, according to a source close to the death investigation. These include the participation of River's personal throat doctor.

Yorkville Endoscopy issued a statement last Thursday denying reports that any vocal cord biopsy has ever been done at the clinic, although federal privacy law prevented any patient information from being released.

The day after the denial was issued, the clinic confirmed that Dr. Cohen "is not currently performing procedures. ... Nor is he currently serving as medical director."

The source said that at this time neither Cohen nor the ear, nose and throat doctor have been accused of wrongdoing by investigators.

The clinic declined to respond to the source's comments about a biopsy or a selfie, citing federal privacy law.

Melissa Rivers has not remained publicly silent since her mother's death on September 4, although she did post an online message thanking friends and fans Wednesday evening"

"As my son Cooper and I mourn the loss of my mother, we want to thank everyone for the beautiful cards and flowers conveying heartfelt messages and condolences, which continue to arrive from around the world and through social media. My mother would have been overwhelmed by the scope and depth of the love that people have expressed for her. It is certainly helping to lift our spirits during this time.

"We are forever grateful for your kindness and support in continuing to honor my mother's legacy, and for remembering the joy and laughter that she brought to so many."