'Fear Street': R.L. Stine and The Return of Teen Horror 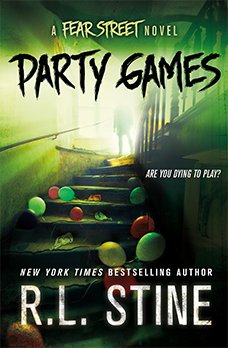 (CNN) -- Author R.L. Stine has returned to the evil street that made him famous in the 1990s, and fans are looking forward to the new ways he'll terrorize Shadyside High School teenagers on "Fear Street."

"Party Games," out on September 30, is the first of six new "Fear Street" books that Stine is releasing. The premise: When Shadyside High School senior Brendan Fear has a birthday party at his parent's summer house on Fear Island, things go from bad to worse.

Stine, 70, is the author of more than 300 novels for children and teens, including the much-loved "Goosebumps" and "Fear Street" series. The latter was a major hit, selling 80 million copies and building a fan base that for years has been asking him to revive the spooky series.

"The whole thing happened because of Twitter," Stine said. "It's a great way to keep in touch with my original readers, and 'Fear Street' was mentioned more than anything else. That's what they read when they were kids. And I suppose we're all nostalgic for what we read back then."

The new "Fear Street" arrives at a time many consider to be a renaissance of young adult horror. It disappeared as a dominant genre in the early 2000s with the rise of fantasy novels and series such as "Harry Potter" and "Eragon." Popular shows such as "The Walking Dead" and "American Horror Story" helped revive interest in horror literature, said Catherine Scully, young adult editor for the Horror Writers Association.

Like today's TV shows, today's teen horror novels are darker and scarier than the "Fear Street" of the 1990s, reflecting the way popular culture has changed. Along with Stine, a new class of authors is attempting to redefine young adult horror for the "Saw" generation, which can easily find graphic depictions of violence on TV and in movies and video games. By weaving in diverse elements -- such as historic gothic and psychological thrillers -- and making both protagonists and villains more three-dimensional, this new wave of authors is hoping to appeal to readers looking for something more than gore and torture porn.

Unlike horror depicted on television and the big screen, in horror literature for young adults, subtlety is key, rather than shock value, author and horror expert Jonathan Maberry said.

"Modern teen horror goes more inside the personal experience rather than the body count," he said. "The more subtle you go and leave for the reader to interpret, they can participate and it's even scarier."

Where it began, where it's going.

The definition of teen horror can be difficult to pinpoint, especially as new authors broaden the range of topics contained within the genre. In the broadest sense, it embodies the disturbing, imaginative manifestations of fear and dread, life-or-death situations, thrilling surprises and a loss of control, authors and literary observers say.

Horror is defined by what scares you, "and that's very personal and different for each person," said Scully, who reviews young adult horror in HWA's 'Scary Out There' blog.