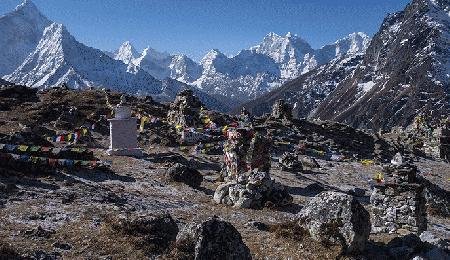 But they do leave their trash. Thousands of pounds of it.

That's why an experienced climbing group from the Indian army plans to trek up the 8,850-meter mountain to pick up at least 4,000 kilograms (more than 8,000 pounds) of waste from the high-altitude camps, according to India Today.

The mountain is part of the Himalaya mountain range on the border between Nepal and the Tibet region.

The 34-member team plans to depart for Kathmandu on Saturday and start the ascent in mid-May. The upcoming trip marks the 50th anniversary of the first Indian team to scale Mount Everest.

"We will target the mountaineering waste from Camp 1 (19,695 feet) to the summit," said Jamval, who has scaled Mount Everest twice.

"There are old cylinders, tents, tins, packets, equipment and other mountaineering waste. Apart from our own haversacks weighing 10 kg each, we intend to bring in another 10 kg each on the trip."

More than 200 climbers have died attempting to climb the peak, part of a UNESCO World Heritage Site.

The Indian expedition isn't the first attempt to clean up the trash left by generations of hikers.

Among the cleanup efforts is the Eco Everest Expedition, an annual trip launched in 2008 that is all about climbing "in an eco-sensitive manner," bringing old refuse, in addition to that generated during the trip, down for disposal, according to the Asian Trekking website.

Last year, Nepalese tourism authorities started to require hikers to carry out an extra 18 pounds of garbage, in addition to their own trash and human waste, according to the New York Times.