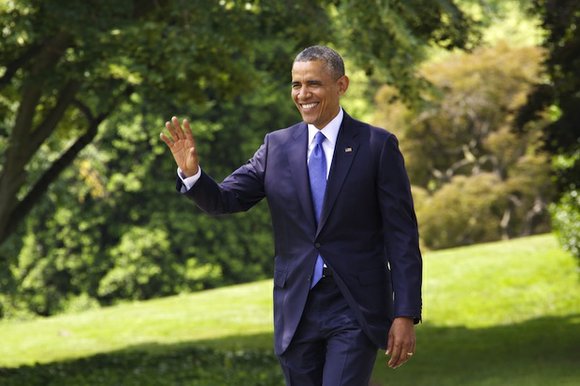 WASHINGTON (CNN) -- President Barack Obama said Thursday that six world powers have struck a "good deal" with Iran that will "prevent it from obtaining a nuclear weapon."

"We have a historic opportunity to prevent the spread of nuclear weapons in Iran, and to do so peacefully, with the international community firmly behind us. We should seize that chance," Obama said in comments delivered in the Rose Garden.

Obama's statement came after negotiators for the United States, Russia, China, Britain, France and Germany agreed with Iran on a "framework" for a deal -- with the final text due by June 30 -- limiting Tehran's nuclear ambitions.

The deal, which spans at least 10 years -- and for some provisions much longer -- would limit Iran's centrifuges, reduce its enriched uranium stockpiles, increase inspections of its nuclear facilities and in general make it harder for the country to build a nuclear weapon. In exchange, the world's powers would drop sanctions that have strangled the Middle Eastern country's economy in recent years.

The deal faces skepticism from Israeli Prime Minister Benjamin Netanyahu, who lambasted the negotiations during a March speech to Congress in Washington.

Obama said he plans to call Netanyahu today and noted that he's already spoken to the king of Saudi Arabia, another country concerned that the deal doesn't take a hard enough line on Iran. The President said he plans to invite other Arab leaders to Camp David to discuss security this spring.

Secretary of State John Kerry told CNN's Elise Labott that the deal "is not a gamble."

"There's a lot here that on close examination people will see reinforces the ability to be able to know what is happening," Kerry said in an interview Thursday.

Obama will also face a challenge from Congress, where a majority of Republicans have echoed Netanyahu's objections and indicated they could put roadblocks in front of the deal. Some Democrats have also expressed their objections.

"If Congress kills this deal not based on expert analysis and without offering any reasonable alternative, then it's the United States that will be blamed for the failure of diplomacy," Obama said. "International unity will collapse."

House Speaker John Boehner, R-Ohio, called the framework "an alarming departure from the White House's initial goals" and said he is particularly concerned by the administration's "signaling it will provide near-term sanctions relief."

"It would be naïve to suggest the Iranian regime will not continue to use its nuclear program, and any economic relief, to further destabilize the region," Boehner said.

"Now is the time for thoughtful consideration, not rash action that could undermine the prospects for success," he said. "We have much to learn about what was negotiated and what will take place between now and the end of June. In the coming days and weeks, we should all take a deep breath, examine the details and give this critically important process time to play out."