Netanyahu: Iran must recognize Israel's right to exist in deal 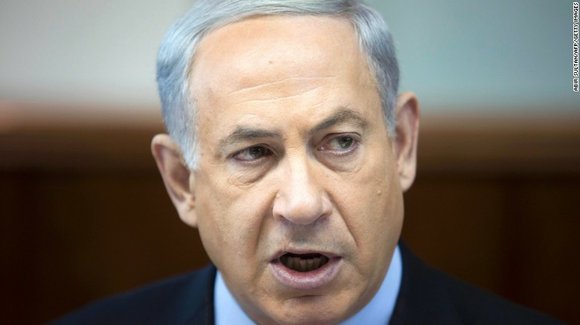 Netanyahu has been perhaps the most vocal critic of nuclear talks with Iran, insisting again and again it can't be trusted. He took his case to the U.S. Congress last month, at a time before negotiators had hammered out any sort of agreement, over the objections of President Barack Obama.

There's never been any dispute about his take, but the Prime Minister has sharpened his rhetoric in recent days, saying the deal increases the risk of a "horrific war."

Netanyahu has lobbied hard for a deal that dismantles and disassembles Iran's nuclear infrastructure -- rather than limiting its usage or repurposing Iran's facilities -- but such stipulations were not part of the framework agreement. He has also called for the removal of sanctions to be tied to the reduction of what he characterizes as Iran's aggression in the region, not just its moves on its nuclear program

In the absence of both elements, Netanyahu is calling the emerging deal a historic mistake.

After an emergency Cabinet meeting Friday afternoon hours before the Jewish holiday of Passover, Netanyahu said the agreement "would pose a grave danger to the region and to the world and would threaten the very survival of the state of Israel."

" ... I want to make clear to all: The survival of Israel is non-negotiable," Netanyahu said. "Israel will not accept an agreement which allows a country that vows to annihilate us to develop nuclear weapons, period."

Obama called Netanyahu after Thursday's announcement of the framework agreement to reassure him that Israel's security will remain a prime concern in the ensuing negotiations and the final deal, which faces a June 30 deadline.

But Netanyahu said he isn't convinced Israel is safe from Iran.

"Just two days ago, Iran said that 'the destruction of Israel is non-negotiable.' And in these fateful days Iran is accelerating the arming of its terror proxies to attack Israel."

The Israeli leader added that "this deal would legitimize Iran's nuclear program, bolster Iran's economy and increase Iran's aggression and terror throughout the Middle East and beyond."