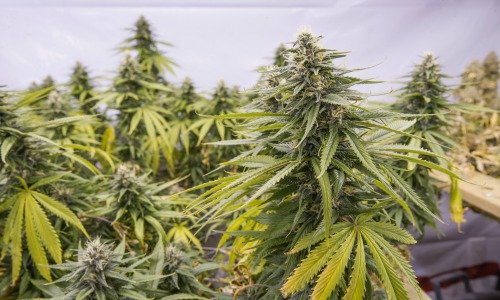 WASHINGTON (CNN) -- A majority of voters in three key swing states support legalizing marijuana, according to a new Quinnipiac poll.

But it's not like they'd want to smoke it or anything, the poll shows. Just for others to use, obviously.

The Quinnipiac survey, conducted from March 17-28, shows 55% of voters in Florida, 52% in Ohio and 51% in Pennsylvania support allowing adults "to legally possess small amounts of marijuana for personal use."

Less than a fifth of voters in those states, however, say they'd "definitely" or "probably" use it. The number is lowest in Ohio, where just 14% of voters say they'd smoke pot if it were legal, while it's highest in Florida, where 17% say the same.

But the Quinnipiac poll shows legalizing marijuana for medical use is far less controversial. Vast majorities of voters, more than 80% in each state and up to 88% in Pennsylvania, say that medicinal marijuana should be legal.

The survey's findings come as an increasing number of states are looking at legalizing small amounts of weed for medicinal, and in some areas, recreational use. A handful of states, including Florida and Pennsylvania, have pending laws to legalize weed this year; a Florida constitutional amendment seeking legalization just failed on the ballot last year, but activists are gearing up for another fight this cycle.

And swing-state support for legal weed has the potential to turn it into a potent issue in the 2016 presidential race.

The survey was conducted among 1,087 Florida voters, 1,077 Ohio voters and 1,036 Pennsylvania voters and has a margin of error of 3 percentage points in each state.