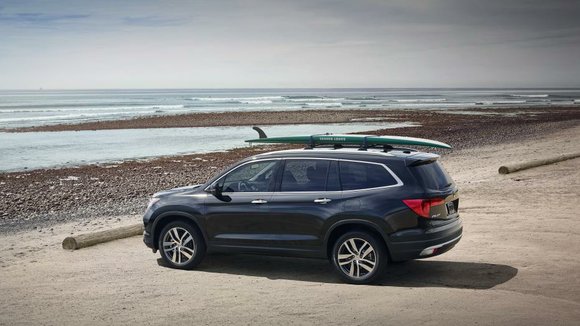 The 2016 Honda Pilot gets a new, range-topping "Elite" trim, which is shown here.

The 2016 Honda Pilot, which the automaker will be rolling out this summer, is lighter, curvier, more efficient and more powerful than its predecessor -- and though we haven’t tested it yet, we’ve learned a little more about the three-row crossover’s specifications.

First, powertrain. The 2016 Pilot family keeps it simple with one engine: A 3.5-liter naturally aspirated SOHC V6 that produces 280 hp and 260 lb-ft of torque. It’s paired to either a six-speed or a nine-speed automatic transmission -- a first for Honda -- depending on the trim level. Honda promises a “more refined, powerful and fuel-efficient performance than ever before” and while we don’t know about its thriftiness, it does gain 30 hp and 7 lb-ft over its predecessor.

The ’16 Pilot loses the previous model’s faux-SUV boxiness, but it retains the option of all-wheel drive. Honda’s AWD system -- Intelligent Variable Torque Management for all Four Wheels, or i-VTM4 for short, now has the ability to distribute varying amounts of torque to each rear wheel (in addition to varying torque to front and rear axles).

Now onto the really exciting stuff: Trim levels. There are a lot of them: LX, EX, EX-L, Touring and Elite. To that slate, you can also add two sub-trims -- EX with Honda Sensing and EX-L with Honda Sensing. That’s seven possible trims, folks. Honda Sensing, by the way, is a bundle of driver safety features like collision warning and mitigation braking, lane keeping, adaptive cruise control and so on.

Though all trims get the 3.5-liter V6, only the Touring and Elite get the nine-speed transmissions. Elite-trimmed Pilots get genuine Carrara marble trim, a set of hand-knit angora wool seat covers and access to the American Express Centurion credit card program.

Nah, just kidding. But you do get goodies like heated and vented front seats, a heated steering wheel, a panoramic roof and blind-spot sensors with a rear cross-traffic monitors.

With its new look, massive (for Honda) 20-inch rims and increased output, the 2016 Pilot seems like a step forward for the model. We’ll let you know how it stands up to real-world testing as soon as we can work in some time behind the wheel.