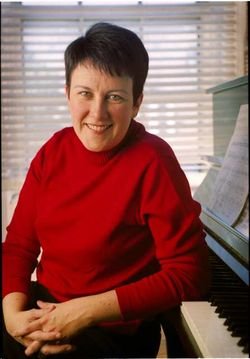 On April 17-19, conductor, pianist and composer Robert Spano leads the Houston Symphony in a varied performance of celebrated compositions that helped launch Jennifer Higdon’s career, such as the eloquent blue cathedral and her Concerto for Orchestra.

Spano’s connection and relationship with Higdon dates back to the early 2000’s when they collaborated in the premiere of blue cathedral and the recording of the Concerto for Orchestra. “Robert understands that living composers have something important to say and is great about helping foster the communications between the audience and the composer,” said Higdon.

Higdon is one of the most performed composers in the contemporary repertoire. In fact, blue cathedral – inspired by her younger brother Andrew Blue’s death at age 33 – is one of the most widely programmed of today’s American composers, which has now received more than 500 performances worldwide since its premiere in 2000.

The program will also feature Chopin’s Piano Concerto No. 1, a concerto full of the brilliant piano writing and poetic lyricism for which Chopin is known. That piece will be performed by world-class pianist Garrick Ohlsson, an established musician of magisterial interpretive and technical prowess and one of the world’s leading exponents of music of Frédéric Chopin.

Although especially known for his knowledge of Chopin, Ohlsson commands an enormous repertoire ranging over the entire piano literature. First prize winner of the 1970 International Fryderik Chopin Piano competition in Warsaw – one of the oldest and most prestigious music competitions in the world – Ohlsson has since recorded the complete works of Chopin and continues to perform with top orchestras internationally.

A free Prelude pre-concert discussion led by Robert Spano and Jennifer Higdon will be held 45-minutes prior to the start of the concerts at Jones Hall on Saturday evening and Sunday afternoon. This pre-concert discussion offers the rare opportunity to hear the composer’s views and insights into the music audiences are about to hear.

Unless otherwise noted, all concerts take place at Jones Hall for the Performing Arts, 615 Louisiana Street, in Houston’s Theater District. For tickets and information, please call (713) 224-7575 or visit www.houstonsymphony.org unless otherwise noted. Tickets may also be purchased at the Houston Symphony Patron Services Center in Jones Hall (Monday – Saturday from 10 a.m. to 6 p.m.). All programs and artists are subject to change.

A free Prelude pre-concert discussion led by Robert Spano and Jennifer Higdon will be held 45-minutes prior to the start of the concerts at Jones Hall on Saturday evening and Sunday afternoon.