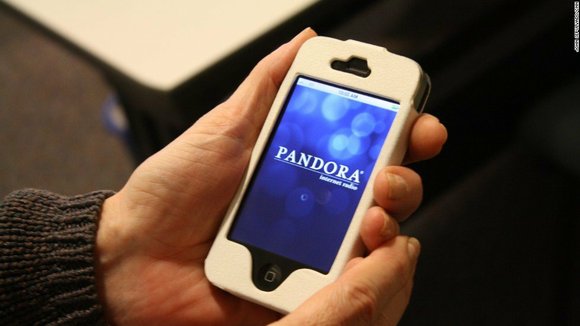 Pandora was already a popular desktop music-streaming service, but its appearance on smartphones allowed users to take their personalized tunes on the go.

NEW YORK (CNNMoney) -- Spotify is reportedly raising money in a round of financing that would value it at $8.4 billion ... and that is sweet music to shareholders of Pandora. But why?

Shares of Pandora, which is often compared to the rival streaming music service Spotify, rose as much as 4% Monday morning following a report in Friday's Wall Street Journal about Spotify's latest cash injection.

The move is a bit curious.

Even though Pandora and Spotify are often lumped together in the broader music category, they are fairly different from each other.

Pandora is more like an online radio network, while Spotfiy lets users pick and choose specific songs and artists for playlists.

Lot of risks in Pandora's box. It's also odd that investors are assuming that good news for Spotify means that Pandora deserves a higher valuation as well.

Have investors forgotten about the fact that Pandora's stock has fallen more than 30% in the past year?

Or that there are legitimate concerns about slowing ad revenue growth? Or that royalty payments to artists, songwriters and record labels are eating into profits? Or that analysts expect Pandora to report a loss when it releases its first quarter results next week?

I guess none of this matters with the Nasdaq back above 5,000. Tech euphoria reigns supreme. Long live the unicorns!

One enthusiastic Pandora fan on StockTwits tried to argue that Pandora could be worth more than 60% above its current stock price of around $17.50 if investors valued Pandora on par with Spotify.

Pandora was not immediately available for comment about the move in its stock Monday.

Investors should be careful though. One reason for Pandora's pop Monday may be the fact that so many investors are betting against it.

More than 15% of Pandora's available shares were held by short sellers as of the end of March. These traders borrow a stock and sell it with the hope of buying it back later at a lower price.

Some of them may be buying the stock on Monday to protect themselves against losses. It's a phenomenon known as a short squeeze ... and it could be just temporary.

Then there are tech giants Apple (which owns Beats in addition to iTunes) and Google, which recently acquired streaming app Songza and also has its own Google Play service. And YouTube, of course.

Finally, you have Spotfiy and the music industry's newest streaming service Tidal. Tidal is backed by Jay-Z and has been endorsed by many well-known musical artists.

To Pandora's credit though, it's had to deal with tough competition for many years now. And the company is still around.

It's hard to imagine Pandora going away completely. The company had 81.5 million active listeners as of the end of 2014.

Takeover rumors haven't gone away. That's not something to sneeze at ... and it's probably the main reason why the company is constantly mentioned as a possible takeover target. Pandora shares surged in mid-March on vague merger rumors.

Over the past few years, Pandora has been cited as a possible fit for Apple, Amazon, Google and Yahoo.

So even though it may be silly to buy Pandora's stock today just because of Spotify hype, it may be equally silly to write a funeral dirge for the company as well.

If you're looking for a good theme song for Pandora, check out the Gloria Gaynor station: "I Will Survive."