What's in that Iran bill and why all the fuss about it? 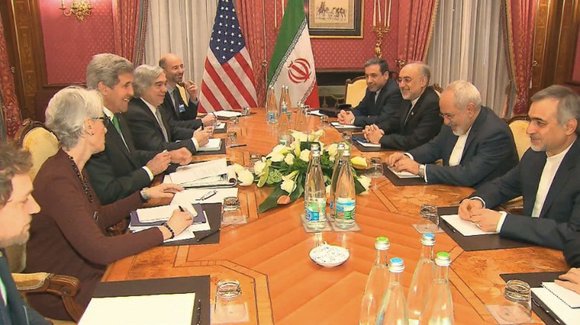 WASHINGTON (CNN) -- For months, the White House and Congress have wrangled over a bill that would give lawmakers a greater say in the Iran nuclear deal the administration is hammering out along with other world powers.

And now, less than two weeks after a framework agreement with Tehran was reached, the Senate Foreign Relations Committee is planning to take up the measure.

On Tuesday, the committee will consider amendments to Tennessee Republican Sen. Bob Corker's Iran Nuclear Agreement Review Act before deciding whether to have the full Senate vote on it.

For many in Congress, it's a very simple premise: Congress should weigh in on the terms of a final nuclear deal with Iran.

But for the White House, and some Democrats in Congress, that's an explosive idea that could derail the talks --- and therefore must be stopped.

So what's in the bill?

Supporters of the legislation have emphasized that it would allow Congress to give a thumbs up or down on the deal President Barack Obama is aiming to finalize with Iran by the negotiations' June 30 deadline. Backers think that's only fair since the United States is contemplating a major nuclear pact with a decadeslong enemy.

The bill would give Congress a chance to hold hearings, host briefings and pave the way to a vote on a joint resolution that could express approval or disapproval of the deal. It also requires the Obama administration to quickly report to Congress on details of the deal and regularly assess whether Iran is keeping its commitments. And it spells out what the President needs to do vis-a-vis Congress if Iran is found violating the terms.

But most important, it would keep President Barack Obama from waiving any congressional sanctions on Iran during Congress' 60-day review period. And if Congress passes a joint resolution of disapproval, then sanctions could not be lifted even after that time.

Does this hurt the diplomatic effort to reach a final deal?

Iran's primary reason for agreeing to the deal's limits on its nuclear program is to get sanctions relief.

Iranian Supreme Leader Ayatollah Ali Khamenei and President Hassan Rouhani have insisted sanctions must be lifted on day one of the deal. While the Obama administration has said it would wait several months before lifting sanctions -- to verify that Iran has taken major steps to roll back its program --- the President is counting on having some latitude to waive sanctions in order to give Iran an incentive to sign the deal and then keep its commitments.

The Corker bill makes it less likely sanctions would be lifted, and lifted in a timely way, which gives less encouragement to Iran.

Without the bill, could Obama lift all sanctions on Iran?

Not all, but most --- at least for a limited time.

Without the Corker-Menendez bill (named after Corker and lead Democratic co-sponsor Sen. Bob Menendez), Iran could see nearly all nuclear-related sanctions at least temporarily lifted. Those enacted through the United Nations and by presidential executive order could be fully removed, and most of those passed by Congress could be waived by Obama until he leaves office, when they would go back into effect unless the next president continues to waive them.

If the Corker-Menendez bill becomes law and a deal is finalized, Obama wouldn't be able to lift the congressional sanctions for at least 60 days.

How can Obama waive sanctions passed by Congress anyway?

The biggest sanctions package approved by Congress, widely credited with crippling Iran's economy and bringing the country to the negotiating table, was the 2010 Comprehensive Iran Sanctions, Accountability, and Divestment Act.

It included a provision that gives the President leverage to waive sanctions for a limited time if he determines it's in the U.S. national security interest.

He wouldn't be able to permanently sunset the sanctions, though, unless Iran cuts its ties with and stops funding terror organizations around the world, an aspect not being addressed in the current negotiations with Iran and not predicted to happen any time soon.

The administration says sanctions are where Congress could eventually weigh in on the Iran deal -- by repealing them -- but that would only happen if lawmakers deem the deal a good one.

How would Congress weigh in during the 60-day review period?

A joint resolution disapproving of the deal would need to muster a two-thirds majority, though, to override the veto Obama has promised -- an unlikely, but not entirely unthinkable, scenario.

Are there other reasons that Obama opposes this bill?

There are a couple.

First, he's facing a combative, Republican majority in both houses of Congress. Those Republicans have sought to undermine his negotiations with Iran at every turn. Giving those lawmakers a legislative avenue to slam the terms of an eventual deal would, at best, be a political blow to Obama and his administration's efforts to broker an agreement.

There's also the White House's argument that the executive branch has the power to broker international agreements without Congress meddling, while congressional oversight of the Iran deal would set a dangerous precedent. Most international agreements aren't treaties ratified by Congress, and Obama has argued that U.S. allies need to know they can count on those agreements holding up.

So who's backing the Corker-Menendez bill?

Virtually every Senate Republican supports the bill and nine Democrats have signed on as co-sponsors, including independent Sen. Angus King, who caucuses with Democrats. Several more on the left are leaning toward supporting the bill.

That means backers will likely pass the bill with a filibuster-proof majority. It's unclear, though, if they can muster enough Democrats willing to vote to override Obama's veto.

It's not just the numbers, though. Some powerful Democrats are supporting the legislation. Sen. Chuck Schumer of New York, the No. 3 Senate Democrat, who will become the chamber's Democratic leader when Minority Leader Harry Reid of Nevada retires at the end of his term, is a big proponent of the legislation.

Menendez, of New Jersey, who has been working to rally Democrats around legislation on Iran throughout the negotiations, remains the most vocal Democrat on the issue. He was the top-ranked Democrat on the Senate Foreign Relations Committee until stepping aside to face corruption charges handed down earlier in the month.

Also, Sen. Tim Kaine of Virginia, one of the earliest Obama backers during the 2008 campaign, has been insistent on the need for Congress to weigh in and has worked behind the scenes to make Corker's bill more palatable to Democrats -- and the White House. But so far that effort hasn't succeeded, as the White House remains opposed.