United Airlines’ ‘Purple Plane’ is on a Mission For Healthy Babies 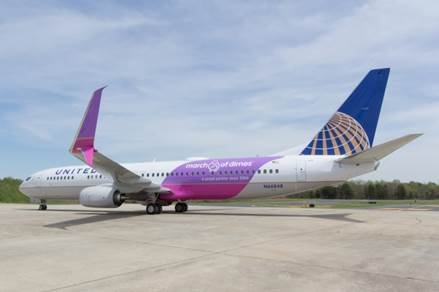 CHICAGO, April 16, 2015 – United Airlines today welcomed a new Boeing 737-900ER aircraft to its fleet, and while it is not the first of the next generation Boeing planes the company will take delivery of this year, it is the first to feature a vibrant purple fuselage. The commemorative aircraft is specially painted to honor United’s ten years of supporting the March of Dimes and their mission to provide families across the country with care and valuable information on pregnancy and having healthy babies.

“Our ‘purple plane’ is more than just a fun and unique paint job – it’s a symbol of the long-standing partnership between our customers and employees and the March of Dimes,” said Rainey. “We know that so many people who fly with us have been touched by the issue of premature birth, and we hope that as customers spot this plane flying around the country, we can bring continued awareness and support to this very important issue.”

Over the past nine years, United employees have contributed more than $5.5 million to the March of Dimes and have walked more than 36,000 miles in March for Babies events nationwide. Last year alone, United and its employees raised more than $700,000 for March of Dimes research, education and services. This year, United has committed to raise $1.2 million for the organization, with about half of that from employee efforts. And thanks to the generosity of the passengers on this flight, United has raised $780,000 for the March of Dimes with today’s delivery.

There are more than 600 March for Babies events around the country with most occurring on April 25 and 26. To find an event near you, please visit marchforbabies.org and enter your zip code. Customers can also purchase a limited-edition March of Dimes aircraft model at www.unitedshop.com.

United Airlines and United Express operate an average of 5,055 flights a day to 373 airports across six continents. In 2014, United and United Express operated nearly two million flights carrying 138 million customers. United is proud to have the world’s most comprehensive route network, including U.S. mainland hubs in Chicago, Denver, Houston, Los Angeles, New York/Newark, San Francisco and Washington, D.C. United operates nearly 700 mainline aircraft, and this year, the airline anticipates taking delivery of 34 new Boeing aircraft, including the 787-9 and the 737-900ER. United is also welcoming 49 new Embraer E175 aircraft to United Express. The airline is a founding member of Star Alliance, which provides service to 193 countries via 27 member airlines. More than 84,000 United employees reside in every U.S. state and in countries around the world. For more information, visit united.com, follow @United on Twitter or connect on Facebook. The common stock of United’s parent, United Continental Holdings, Inc., is traded on the NYSE under the symbol UAL.

Customers can also purchase a limited-edition March of Dimes aircraft model at www.unitedshop.com.