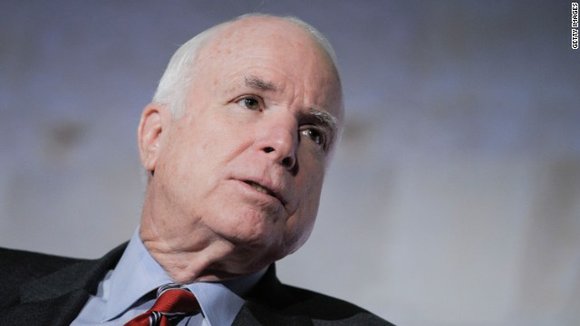 WASHINGTON (CNN) -- Senior Republican Sen. John McCain blasted Pentagon officials on Friday for dramatically downplaying the role of Ramadi as the key Iraqi city stood on the brink of being taken over by ISIS.

"Disregarding the strategic importance of Ramadi is a denial of reality and an insult to the families of hundreds of brave young Americans who were killed and wounded during the Surge fighting to free Ramadi from the grip of Al-Qaeda," McCain, chairman of the Senate Armed Services Committee, said in a written statement released by his office, which was later joined onto by Repbulican Sen. Lindsey Graham.

While not home to critical infrastructure like the massive oil refinery in Baiji, also under ISIS assault, Ramadi is just 70 miles to the west of Baghdad and in the middle of Iraq's Sunni heartland.

Despite its location, Joints Chiefs of Staff Chairman Gen. Martin Dempsey characterized the city Thursday as "not symbolic in any way," primarily because ISIS has not formally declared it as a part of the Islamic Caliphate it seeks to establish across areas in Iraq and Syria. He also said the city was not "central to the future of Iraq."

With Ramadi under relentless assault from ISIS, the top U.S. military official also said the fall of the city would not mark a turning point in the ongoing military campaign against the terror group.

"I would much rather that Ramadi not fall, but it won't be the end of the campaign should it fall," Dempsey told reporters at a Pentagon news conference, referring to U.S.-led attacks in coordination with the Iraqi army to beat back the terror organization. "We've got to get it back."

Dempsey referred to the battle of Baiji as a "more strategic target" because of the significant role the refinery there plays in the Iraqi economy.

"I was up front in our meetings about how a lasting victory over ISIL requires inclusive governance in Baghdad and respect for local populations in all areas liberated from ISIL control," Defense Secretary Ashton Carter said at the same news conference, his first since assuming office.

Carter also acknowledged the difficulty the U.S is having keeping tabs on Al Qaeda in the Arabian Peninsula -- an organization with the stated goal of attacking the United States -- now that America doesn't have a presence in its host country of Yemen.

"It's easier if there's a government with which we can cooperate in existence in that country," Carter said of the Persian Gulf state engulfed in a brutal civil war, with AQAP now seizing an airport in the southeastern part of the country.

While officials do not acknowledge it publicly, the United States can still address the terror threat in Yemen using unmanned aerial drones.

The Pentagon officials also addressed the recent announcement from Russia that it would sell Iran an advanced air defense system. Dempsey said that despite the sale, the United States would still be able to act if a deal over Iran's nuclear program does not ultimately succeed.

"The military option that I owe the president to both encourage the diplomatic solution and, if the diplomacy fails, to ensure that Iran doesn't achieve a nuclear weapon, is intact," he said.