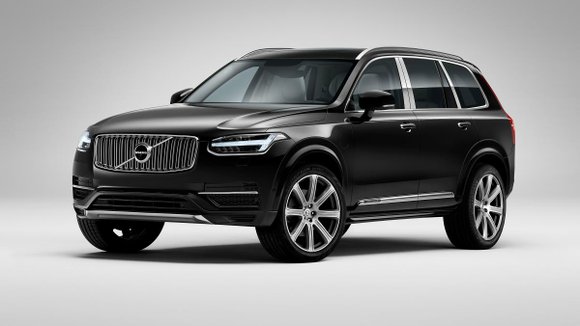 The rear seats have been redesigned to offer more room and luxury.

New range-topping model to be unveiled at Shanghai auto show

The Range Rover Autobiography is about to get some company: Volvo has just bumped its 2016 XC90 SUV up to first class, set to debut at the Shanghai motor show. Dubbed the XC90 Excellence, this range-topping SUV has just four seats instead of seven, with the second row of seats having been redesigned to deliver a new level of luxury.

The XC90 Excellence will feature two power-reclining rear seats with ventilation and massage functions, while a new center console with an armrest and cupholders has been added as well. The center console will also offer two fold-out tray tables as well as a refrigerator located parallel to the seatbacks. The refrigerator, not simply a wine cooler, will come equipped with handmade Orrefors crystal glasses which can be placed into the heated or cooled cupholders, though it'll be up to the rear-seat passengers to provide the actual beverages.

In a curveball of sorts, the XC90 Excellence does not feature a stretched wheelbase, though the redesign of the rear passenger compartment and seats buys rear-seat occupants a little extra legroom.

The XC90 Excellence will also be set apart from the recently displaced range-topping XC90 Inscription model by ambient lighting, leather detailing in charcoal or blonde colors, a dividing screen for the luggage compartment, rear passenger footrests, and additional sound insulation for the cabin as well as Pirelli Noise Cancelling System tires. The XC90 Excellence will also feature an integrated ionic air cleaner, which should give you a good idea at which market Volvo is aiming this SUV.

Volvo isn't sparing superlatives when it comes to the rollout of this luxury model, which will be available in a number of global markets.

"This is our new flagship car," said Thomas Ingenlath, senior vice president, design. "We have created the ultimate luxury experience of Scandinavian design. Volvo has never launched a car like this before. This is the car that demonstrates what the name Volvo now means."

The concept of an exclusive luxury model based on existing Volvo cars isn't all that new per se, as the company has previously offered stretched 264TE and S90 Royal Hermes sedans in addition to a six-person S90 limousine, as well as a stretched S80 sedan which is offered only in China for now. Volvo has also recently made the decision to offer the long-wheelbase S60L stateside sourced from the Chinese market, dubbed the S60 Inscription for the U.S. In the case of the XC90 SUV, it's easy to see why a wheelbase stretch was not needed -- the reworking of the rear passenger compartment could yield the increased legroom as the XC90 has all that space in the back.

"What we have designed is amongst the best rear seat experiences available in a luxury car," said Ingenlath. "The result is a superlative environment for relaxed comfort or doing business."

The choice of the Shanghai motor show for the debut of the XC90 Excellence also makes plenty of sense, as that market is heavily oriented toward long-wheelbase versions of just about everything, starting with the BMW 3-series and ending with Mercedes-Benz Pullman sedans of all generations.

Volvo will offer this flagship SUV via online ordering in selected markets, though the company has not mentioned whether the Excellence will be available in the U.S.