SULPHUR, La. (April 17, 2015)— The new Creole Nature Trail Adventure Point attraction and satellite convention & visitors bureau office in Sulphur is a place to learn about the nature and traditions of Southwest Louisiana as well as our thriving art community.

“Displaying the works of these talented local artists is, in essence, a continuation of the interpretative nature of Creole Nature Trail Adventure Point. The pieces illustrate the artists' creative perspectives on the culture, people, and ‘dwellers’ of Southwest Louisiana,” said Susan Reed, art consultant for the project and Director of the Imperial Calcasieu Museum.

The demand for visitor services along the western side of the trail became great after Hurricane Rita destroyed the visitor center at the Sabine National Wildlife Refuge nearly 10 years ago.

The exhibits inside Creole Nature Trail Adventure Point fill that need. “The Southwest Louisiana Convention & Visitors Bureau realized the significance of providing an educational experience for visitors who come to the area to immerse themselves in the outdoors and our culture after losing the visitor center at the Sabine National Wildlife Refuge,” said Shelley Johnson, executive director of the CVB.

The outside of the building is nautical in nature with the Gumbeaux Too shrimp boat, primed for a photo opportunity for visitors. Upon entering the center, visitors are greeted by Adventure Guides that are situated at a desk area that resembles a live oak tree in realistic detail. Surrounding the tree and throughout the exhibit space, visitors walk along a roadway path, designed to remind them that the Creole Nature Trail is a driving tour. 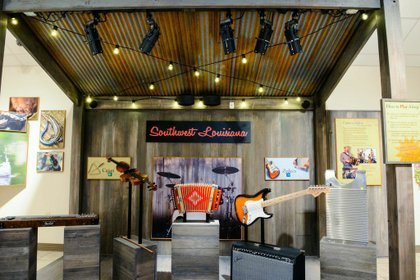 The entire space has elements that communicate the driving attraction with guardrails, highway signage as well as a gas pump that features three videos:the Southwest Louisiana Boudin Trail, Birds of a Feather and Louisiana Flavors.

Other displays communicate the differences between a marsh and a bayou, with realistic representations of flora and fauna and sounds of nature with birds chirping overhead. In between the marsh and bayou displays, there is a duck blind where visitors can use binoculars to peek through to see the displays, pose for a picture wearing camouflage jackets and boots and wrap their arms around a trusty hunting dog.

The culinary interactive display showcases boudin, with an endless boudin stuffer that visitors can manipulate, as well as smells of Creole and Cajun cooking and sounds of a boiling pot of delicious crawfish. Visitors are encouraged to take a recipe from a recipe box on the counter.

The Gulf Coast is represented with a marine life exhibit where visitors can try their hand at crabbing, learning how to tie a knot and guessing how many fish a pelican can hold in its mouth. There are also educational representations of the swamp and prairie lands.

Visitors can experience a grand finale by performing on a music stage where they can pretend that they are playing along with Cajun and Zydeco tunes. The center piece is an accordion which ties the two different genres of music together, and everyone can sound like a professional musician as they play the bass, scrub board, accordion, fiddle and steel guitar. 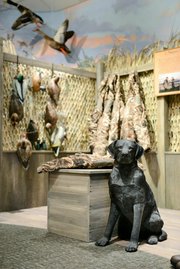 Creole Nature Trail Adventure Point is a fun, free attraction along the western gateway of the Creole Nature Trail All-American Road, which is geared toward an educational, immersive experience showcasing the culture, food, music and outdoor adventures to be had in Southwest Louisiana. The facility also houses the satellite office of the Southwest Louisiana Convention & Visitors Bureau.

Adventure Point offers visitors from around the country and world an opportunity to sample a taste of what they can see and do in the area while interactive, hands-on exhibits highlight the unique estuary system of the Creole Nature Trail All-American Road, one of 42 All-American Roads in the United States.

“While the Creole Nature Trail All-American Road is a destination unto itself, research shows that people are seeking authentic experiences when they travel. Much of what visitors see and experience along the trail, they cannot fully understand without a comprehensive orientation such as the exhibits offered at Adventure Point. The interactive displays are meant to be memorable, entertaining and educational, and we are thrilled to have an opportunity like this in our area so that others can embrace our unique culture and landscape before experiencing it for themselves,” said Shelley Johnson, executive director of the CVB.

After Hurricane Rita destroyed the visitor center at the Sabine National Wildlife Refuge in 2005, there were no visitor services on the western side of the Creole Nature Trail. After many years of working to get the center rebuilt, and then, Hurricane Ike occurring in 2008, plans were put into motion to create Creole Nature Trail Adventure Point, closer inland.

“It’s difficult to believe, but nearly 10 years after Hurricane Rita, the dream of having an immersive interpretive center along the western side of the trail is realized,” said Johnson.

“With the growth of the hotel community throughout our parish, it was wise to reinvest in local tourism, especially on a project like the Creole Nature Trail Adventure Point which promotes visitation to both Calcasieu and Cameron parishes,” said Mike Dees, CVB building committee chairman for the project.

Split Rock Studios designed the interactive exhibits; architectural plans for the 4,760 sq. ft. facility were developed by Vincent Shows Architects, and Gunter Construction built the center that houses the exhibits. Members of the CVB board who served on the building committee were Mike Dees, Gary Cooper, Donna Richard and Rob King. The total cost for the attraction is $2 million. 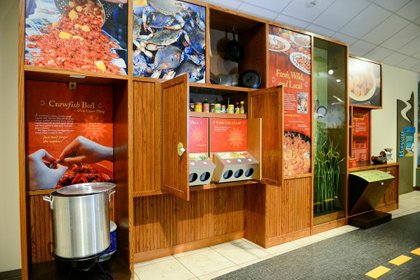 Split Rock Studios is a 40,000 sq. ft. modern design and fabrication facility with exhibit designers, developers, artists and skilled craftspeople who elevate exhibits from the expected to the exceptional. This multidisciplinary team works from coast to coast to design, develop and build interpretive displays for museums, nature centers, visitor centers, zoos, aquariums, and national and state parks.

“We were inspired by the area’s hospitality and consider the project a blessing in so many ways. The Creole Nature Trail has so much to offer and these exhibits will serve as an excellent starting point for those looking to explore the area’s recreation, scenery, and cuisine,” said Craig Sommerville, Chief Operating Officer.

Through the years, Split Rock Studios has received over 20 national awards for excellence exhibitions from organizations like the American Alliance of Museums, National Association for Interpretation, and the Association for Zoos and Aquariums.

“Working with Split Rock Studios was an energetic process. The creative team at Split Rock worked with the building committee comprised of members of our board of directors and CVB staff to deliver an immersive experience to engage the senses as well as the imagination. There is an interactive component to each display, and visitors and residents will be able to enjoy the attraction while simultaneously gaining knowledge,” said Shelley Johnson, executive director of the bureau.

Split Rock Studios was selected to design and fabricate the exhibit displays for the Creole Nature Trail Adventure Point project through a nationwide request for proposal process. The Adventure Point aims to inspire visitors to explore not only the 200-mile trail but the entire region.