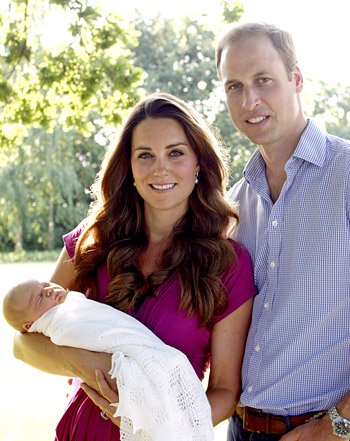 (CNN) -- Much like the ardent young royal-watchers of today, enamored by the Duchess of Cambridge's very being, I was similarly captivated by Diana, Princess of Wales when I was a youngster.

She was a rare breed: stunningly beautiful, immediately accessible, witty, charming and endearingly mischievous -- she was one in a million.

Of course that was long before the, "there were three of us in this marriage, so it was a bit crowded," interviews and tell-all books alleging suicide attempts and acts of betrayal, but back then I was unaware of her more scandalous infamy. I simply adored her ... I still do.

As the world awaits the impending birth of William and Kate's second baby, potential names have become the topic of rampant speculation and heated debate. Girls' names are causing the biggest stir, as there seems to be a belief that the couple are expecting a princess.

If the assumptions are correct, she will be the first Princess of Cambridge born into the royal family in 182 years. The birth of any baby is cause for celebration, but given recent changes in the laws of succession, her arrival would be a historical one.

In choosing a name, titled royals tend to turn to the family tree, rather than a well-thumbed copy of "1,001 Best Baby Names" like the rest of us.

Traditionally they pick dynastic names, and there are plenty to choose from: Elizabeth, Alice, Victoria and Charlotte have all been frontrunners, but the sentimental favorite among punters remains Diana.

In a recent Today Show poll, 32% of Americans predicted the name was a shoo-in, and in the UK the bookies' odds of a baby named after her late grandmother change almost daily as Diana becomes an increasingly popular choice.

That said, in the event the couple do welcome a baby girl, I would hope that they do not opt to name her Diana.

Today Diana's name is as divisive as the very institution of monarchy itself: while some have virtually sainted her, others have been vehemently critical, accusing her of being childish, unhinged and self-serving.

Contrary to popular belief the Queen was very fond of Diana, but should her name be bestowed as a first name upon the baby, it would be perceived as a slap in the face to the monarchy.

In the years since Earl Spencer's scathing attack on the Windsors at Diana's funeral, the nation has moved on and Diana's legacy has been celebrated. She has become a part of royal history. Her memory has been preserved, and the royal family is once again enjoying a renewed sense of popularity.

Out of respect to the Queen, Charles, Camilla and the baby herself the couple simply wouldn't do it.

Diana's name conjures up both positive and negative responses the world over, and whichever side of the fence you're on, the moniker seems to me an almighty burden for a newborn baby to carry.