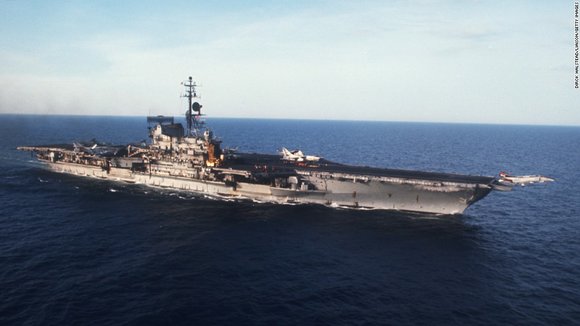 U.S. warships are being deployed to Yemen to monitor ships in the area traveling from Iran and suspected of trafficking arms to Houthi rebels, U.S. officials tell CNN. The move is also meant to reassure allies in the region, the officials said.

(CNN) -- A top Iranian official said Wednesday that a foreign cargo ship had been seized in the Persian Gulf because it had a history of "peculiar" activity.

Iranian Foreign Minister Mohammad Javad Zarif, speaking at New York University, stressed that his country is committed to upholding the freedom of navigation even though it is still detaining the Marshall Islands-flagged Maersk Tigris vessel.

"For us, the Persian Gulf is our lifeline," Mohammad Javad Zarif said, "and nothing is more important for us than freedom of navigation in those waters."

Zarif said the ship had "some rather peculiar activity" in its past that resulted in court action, according to lawyers with whom his ministry has been in touch.

"Simply, our naval forces implemented the decision of the court," he added.

In a statement released Wednesday, Rickermers shipmanagment, which operates the Maersk Tigris, said they have been unable to confirm that claim.

"[Iranian authorities] informed us that the seizure of Maersk Tigris is related to an allegedly unresolved cargo claim," the statement said. "We have however not received any written notification or similar pertaining to the claim or the seizure of the vessel."

"We are therefore not able to confirm whether or not this is the actual reason behind the seizure," it continues. "We will continue our efforts to obtain more information."

A spokesperson for the company also said that 24 people are on board and that they are all doing well. None is American.

A spokeswoman for the Iranian foreign ministry defended the seizing of the ship, saying it was in line with international law, according to report on the state-run Iranian agency Press TV.

But the Pentagon has pointed out that even though the Strait of Hormuz, where the seizure occurred, is in Iranian territorial waters, "innocent passage" is applied -- ships are authorized to pass through the body of water assuming they abide by all the rules of the sea -- because it is an internationally recognized shipping lane.

Zarif, meanwhile, insisted that Iran's decision to seize the ship was unrelated to the ongoing conflict in Yemen, which has created a tense dynamic in the Persian Gulf between Iran and its neighbors.

Last week the U.S. sent warships to waters near Yemen to observe and deter Iranian ships they feared were delivering weapons in support of Houthi rebels who have ousted the U.S.-backed government. The Iranian convoy turned back after the U.S. naval presence was bolstered.

At the same time, the U.S. and five other world powers are negotiating with Iran for a final deal to curb to Tehran's nuclear program. Zarif said those talks would continue Thursday in New York and Monday in Europe.

Zarif called the agreement taking shape between Iran and the six world powers known collectively as the P5+1 "a good agreement."