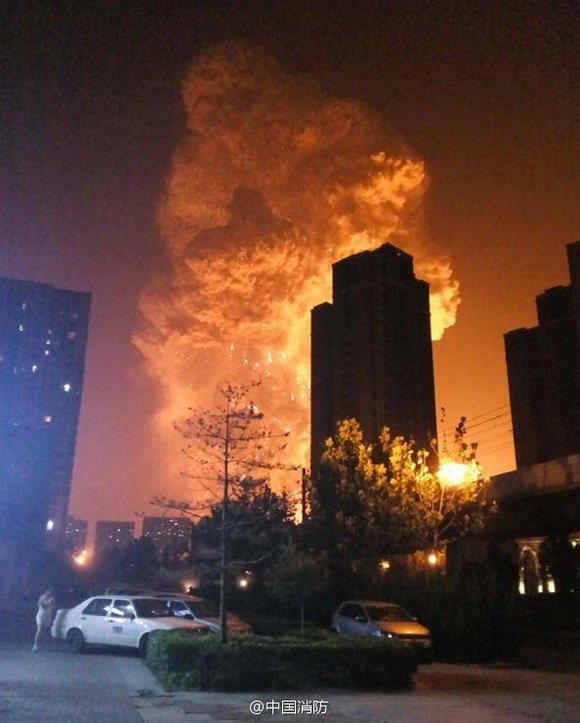 An explosion took place in China's northern city of Tianjin late Wednesday, August 12, 2015 evening, according to China's state-owned broadcaster CCTV. The explosion occurred at a container port where flammable material was being stored in containers, says CCTV. Residents report hearing loud explosions and feeling strong tremors nearby. The Teda Hospital, located near the scene of explosion, has received more than 50 injured people, the country's state-run Xinhua news agency reported.

By Will Ripley, Steven Jiang and Jethro Mullen

TIANJIN, China (CNN) -- You can see the devastation everywhere: in the hollowed-out shells of barely-standing buildings, in the anguished faces of relatives waiting for news of loved ones, in the parade of scorched cars.

But what was it that set off the terrifying blasts that ripped through warehouses containing hazardous chemical materials, sending fireballs shooting across the sky and shaking tall buildings more than 2 miles away?

Hours later, amid the destruction in this northern Chinese port city of more than 13 million, the exact cause of Wednesday night's blast remained unclear.

A thick chemical odor hung in the air. Fires still burned in the waterfront industrial district where the explosions went off. And the grim toll kept mounting.

At least 50 people are confirmed dead, including 12 firefighters, officials said Thursday. More than 500 people are hospitalized, and 71 of them were in critical condition, the state-run Xinhua news outlet reported. Dozens of firefighters are missing.

Local authorities suspended firefighting efforts Thursday because of a lack of information about the "dangerous goods" stored at the warehouse at the heart of the blasts, Xinhua said.

The first explosion was huge, but the second was even more powerful -- the equivalent of 21 metric tons of TNT or a magnitude 2.9 earthquake, according to the China Earthquake Networks Center.

The power of the explosions destroyed the house where Qian Jiping and his wife, both of them migrant construction workers, were staying.

"When I heard the first explosion, I thought we were finished," he said.

Strangers pulled them from the rubble. They fled barefoot, desperate to get away, barely feeling the jagged shards of glass that littered the ground.

Across the city, residents were jolted awake as the blasts shattered windows and fish tanks.

"The shock wave just blew through our apartment. It blew out the glass, it blew out the doors, it knocked out the power," said Vafa Anderson, a teacher at an international school who lives less than two kilometers from the explosions' epicenter.

Anderson told CNN he was awakened by the first blast and was looking out the window when the second went off, sending a "huge mushroom cloud" into the sky.

"I thought it was an earthquake!" said Liu Yue, a 25-year-old woman who lives about four kilometers away. "I was extremely scared. I was afraid my family was in danger."

She told CNN the entire 16-floor building she lives in was rocking.

The injured were taken to different hospitals in the city, with many reported to be suffering from cuts caused by broken glass.

People gathered outside one hospital not far from an area of badly damaged buildings, waiting for news of loved ones.

A severely burned man was wheeled past waiting crowds.

Some people collapsed from the heartbreak of losing someone close to them.