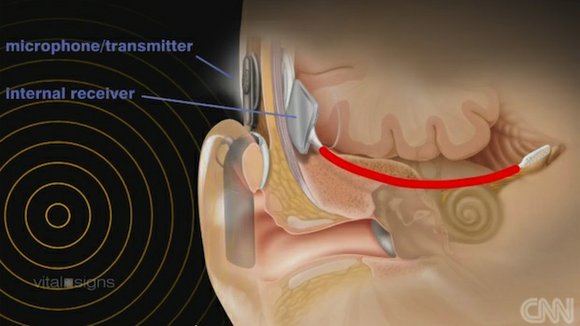 An ABI consists of a microphone and transmitter on the head, which convert sounds from the outside world into electrical signals. Those signals are transmitted to an internal receiver made up of electrodes, implanted on the brainstem. The auditory neurons are stimulated directly in the brain, bypassing the inner ear completely.

(CNN) -- In many ways, Caiden Moran is an average five-year-old boy. Running around his front yard, climbing trees and playing with his brother, the only difference you might notice is the small device on the side of his head.

"Caiden was born, and before we left the hospital we did the newborn hearing screening. And he had failed, so we came back a week later, did the test again, failed again," said his mother Danielle Moran.

Caiden was born profoundly deaf, with no cochleas -- an inner part of the ear that converts sound to nerve impulses and sends them to the brain. At the time doctors confirmed baby Caiden was deaf his father Tommy -- a member of the U.S. Navy -- had been deployed to Hawaii.

Because Caiden had no cochleas, a cochlear implant would be of no help. Instead, his parents learned sign language, assuming it would be the only way their son could ever communicate.

Then, by chance, Danielle heard about a potential solution -- an auditory brainstem implant (ABI).

An ABI consists of a microphone and transmitter on the head, which convert sounds from the outside world into electrical signals. Those signals are transmitted to an internal receiver made up of electrodes, implanted on the brainstem. The auditory neurons are stimulated directly in the brain, bypassing the inner ear completely.

Dr. Mark Krieger refers to the ABI as a "bionic ear."

"By putting this electrode directly into the hearing centers of the brain, it actually is taking stuff and using the brain the way it's designed to work," said Dr. Krieger. "And the brain itself ... in a very young child, is able to grow and develop around this implant."

Dr. Krieger is a pediatric neurosurgeon at Children's Hospital, Los Angeles. In conjunction with USC's Keck School of Medicine, a clinical trial was started in 2014 to perform auditory brainstem implants on young children.

Although surgeons in Italy have been performing the procedure for more than 10 years, this trial is the only FDA-approved one in the United States, and is only available for children aged two to five.

Caiden was chosen for the trial and in January 2015, he underwent brain surgery to implant the device.

"We know from cochlear implant studies that the earlier the auditory system and the brain can be stimulated, the better the children will do," said Dr. Eric Wilkinson, one of the three surgeons who performed Caiden's operation.

"In our study we have the ages of two to five ... we feel that's a balance between finding a safe age to do it but also a young enough age that the child will benefit from the device," he added.

The operation was a success, but the journey is far from over. Caiden has spent his entire young life with absolutely zero auditory input. It will take years of work to train his brain to understand and interpret sounds.