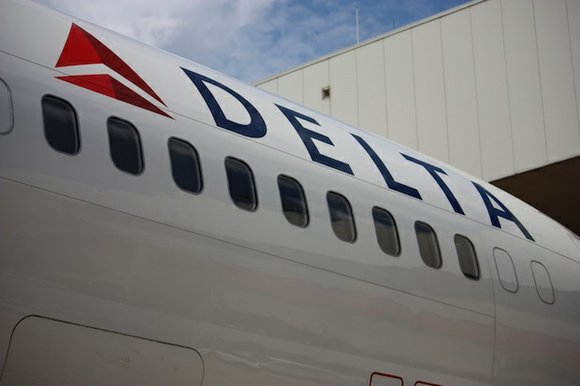 A Delta Airlines jet sits on the tarmac at the Atlanta Hartsfield-Jackson International Airport.

(CNN) -- Lightning struck a Delta Air Lines plane in line for takeoff at Hartsfield-Jackson Atlanta International Airport this week, and it was all captured on amateur video.

The recording shows rain drenching the airfield crowded with aircraft, waiting to take off from the world's busiest passenger airport. The lightning strikes the plane 18 seconds into the 36-second video.

"While filming the line of planes all stacked up during a ground hold in Atlanta on 8/18/15 I happened to capture this direct lightning strike on a 737," wrote a YouTube poster by the name of Jack Perkins. He posted the video on Wednesday.

Delta spokesman Morgan Durrant confirmed that lightning struck Las Vegas-bound Delta Flight 67 on Tuesday, as the Boeing 737-900R aircraft was in the takeoff queue in Atlanta.

There were no reports of injuries among the 111 customers and six crew, Durrant said.

The plane took off nearly two hours late at 7:32 p.m. ET but landed only about 20 minutes later than scheduled, at 8:11 p.m. PT, according to FlightAware.com.

"As with any event involving aircraft, Delta is doing a thorough investigation of the circumstances around this flight as safety is always Delta's top priority," Durrant wrote in an email.

"Aircraft design allows lightning bolts to be safely redirected," Durrant wrote. "Fuselage structure and industrial-grade insulation acts as (a) super-conductive lightning rod that rechannels lightning around and away from customers and crew and out into the ground via the landing gear."

Planes are hit by lightning strikes more commonly than travelers probably realize and are designed with that in mind, commercial airline pilot and AskThePilot.com blogger Patrick Smith said.

"The energy does not travel through the cabin electrocuting the passengers; it is discharged overboard nine times in ten leaving little or no evidence of the strike itself," Smith wrote in his book, "Ask the Pilot: Everything You Need to Know About Air Travel."