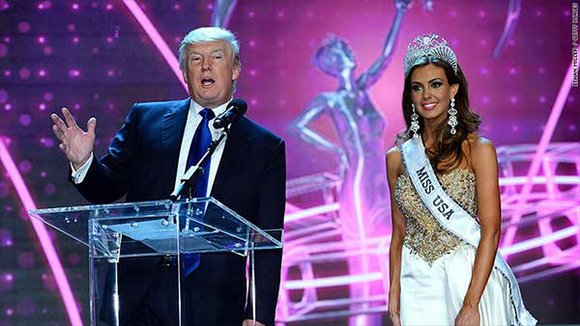 (CNN) -- How do you say, "Open mouth, insert foot," in Spanish? Many English-Spanish bilingual viewers watching conservative commentator Ben Ferguson on CNN late Tuesday thought that's what he did.

But first, for context, a recap of the incident with Ramos:

Ramos had previously had a testy exchange with Trump over the candidate's ideas about expatriating all undocumented immigrants out of the United States. Then Ramos went to Trump's Tuesday news conference in Dubuque, Iowa.

Though not called upon, Ramos tried to engage Trump again on the topic. "Go back to Univision," Trump told him. Ramos persisted, and a security officer walked Ramos out of the conference.

Late Tuesday, on CNN, Ferguson blamed the incident on Ramos, saying it was a Univision stunt. He also asserted that any perceived affront by Trump to Hispanic Americans over Ramos would not hurt his candidacy.

"If you like Univision and Jorge Ramos and illegal immigrants in this country, you're not looking at any Republican candidate, so I'm not worried," Ferguson said.

He continued with the line that became contentious on social media, "And to be real honest, if you're watching Jorge Ramos, the chances you even understand the words coming out of Donald Trump's mouth tonight -- I highly doubt you're going to know what he was saying anyway."

Some viewers who like to watch Univision were also watching Ferguson's comments on CNN. And they let him know on Twitter what languages they understood well.

"According to Ben Ferguson if you watch Univison you probably don't understand English because apparently Hispanics are not bilingual," Ana tweeted.

"@benfergusonshow FYI I'm fluent in both English & Spanish. I understand what is being said on @Univision. Univision viewers are #bilingual," Patricia Alexandra tweeted.

"According to @benfergusonshow, because I watch Univision, I don't understand English," Carlos A. Martinez posted.

All three of them and many more who responded to Ferguson's remarks have something in common. Looking at their Twitter feeds, nearly all of their posts are in English.

That should come as no surprise, according to a Pew Research Center study.

Some 62% of Hispanic people living in the United States speak English -- most of them are bilingual. And a quarter of people identifying as Hispanic Americans don't speak Spanish.

And as with myriads of families that have immigrated to the United States over the centuries, every nascent generation losses proficiency in its ancestors' original language, until knowledge of it disappears from the family.

People of Hispanic origin born in the United States mostly don't speak Spanish, according to Pew. Some 56% did not become proficient in their ancestors' native language.

But Ferguson may have also been wrong in his overall assertion that any perceived affront by Trump to Hispanic Americans won't hurt his election chances or those of other GOP candidates. It could, according to a Pew study published in July.

In the notorious swing state of Florida, for example, known to be decisive in presidential elections with its large number of Electoral College votes, Latino voters in the past overwhelmingly pulled the lever for a Republican candidate. In 2004, they got mostly behind George W. Bush.

The state is home to his brother Jeb Bush, who is also running for president on the Republican ticket.

But since 2008, Hispanic American voter registration affiliation with the Democratic Party has soared, as has independent registration -- both vastly overtaking the number of Hispanic registered Republicans, Pew says.

In 2008 and 2012, the majority of Hispanic Americans in Florida voted for Barack Obama.