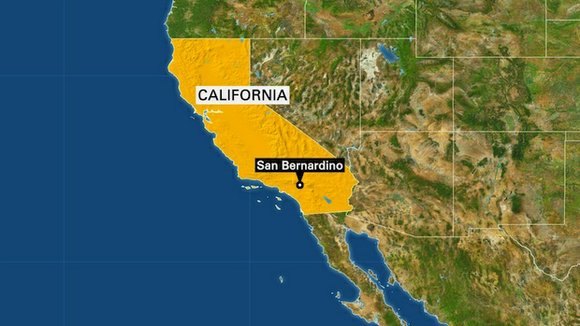 Police in San Bernardino, California, tweeted a warning Wednesday that there was an active shooter situation.

(CNN) -- Perhaps no two mass shootings are identical. Each horrific massacre involves a litany of variables -- casualty tolls, the firearms used, the shooter's mental state, the venue for the slayings, et al -- but early details from this week's San Bernardino rampage indicate this was more aberrant than most.

For one, it involved multiple shooters, and one of them, Tashfeen Malik, 27, was a woman, both of which are highly anomalous.

That the other shooter, Syed Rizwan Farook, 28, was not only romantically involved with but was the husband of Malik, with whom he had a 6-month-old daughter, presents another example of how this mass shooting was far from typical, if any mass shooting can be deemed typical.

Here is a look at why the San Bernardino killing spree was a rare event:

Farook and Malik were armed with handguns and long guns when they burst into a party hosted by the county health department and fatally shot 14 people, wounding at least 17 others.

Mass shootings often produce initial reports of multiple gunmen, likely owing to the confusion and chaos that immediately follow gunfire. The reality, though, at least in the United States, is that mass killings rarely involve multiple shooters.

Of the 28 deadliest shootings in U.S. history before Wednesday -- from Howard Unruh's 1949 rampage in Camden, New Jersey, to Christopher Sean Harper-Mercer's killing spree at Umpqua Community College in Roseburg, Oregon, in October -- only two have come at the hands of multiple shooters: the February 1983 killings at the Wah Mee gambling and social club in Seattle and the Columbine High School massacre in Littleton, Colorado, in 1999.

In Seattle, Kwan Fai Mak, Benjamin Ng and Wai-Chiu "Tony" Ng robbed 14 patrons of the gambling parlor before shooting each of them in the head. Thirteen of the victims died; the other survived to testify against the shooters. In Columbine, teenagers Eric Harris and Dylan Klebold killed a dozen fellow students and one teacher before committing suicide in the school library.

According to an FBI report on 160 "active shooter" incidents in the United States between 2000 and 2013, only two involved multiple shooters: an August 2011 shooting at a Queens, New York, house party in which two men wounded 11 people after an argument and an April 2012 string of drive-by shootings involving two men firing from their vehicles, killing three people, as they drove through Tulsa, Oklahoma.

(Active shooter incidents are described as situations where police respond to a shooting in progress.)

One shooter was female

To be clear, the FBI report does not include only mass shootings, so there were fewer than three deaths (three being the federal criteria for mass shooting designation) or no deaths in some of the 160 cases cited. Nonetheless, the report states, only six of the shootings involved gunwomen:

-- Jennifer San Marco visited her former place of employment, a postal distribution center in Goleta, California, and fatally shot six employees after killing a one-time neighbor on January 30, 2006. She then killed herself.

-- Latina Williams opened fire in a classroom at Louisiana Technical College in Baton Rouge on February 8, 2008, killing two people and then herself.

-- Amy Anderson began shooting at a biology department meeting at the University of Alabama in Huntsville in February 2010, killing three people.

Everytown for Gun Safety, a gun control advocacy group, analyzed 133 mass shootings (the group's criteria is that shooters killed four or more), using FBI and media reports. It found seven mass shootings in which a woman was involved.

An examination of six of those seven incidents demonstrates that only one was a public mass shooting of the San Bernardino ilk, while the other five were more related to domestic violence (we'll get to that seventh example in just a moment):

-- In September 2013, Guadalupe Ronquillo-Ovalle killed her husband, her three children -- 4, 8 and 10 -- and then herself in Rice, Texas, the month after her husband pleaded no contest to assaulting her and was released from custody.

-- Tonya Thomas killed her four minor children and then herself in Port St. John, Florida, in May 2012. The autopsy revealed she had been drinking heavily when she fired 18 hollow-point bullets, requiring her to reload her .38-caliber revolver three times.

-- Sara McMeen killed her boyfriend, three children and herself in Ermington, Illinois, on December 16, 2011. Forty years earlier, her father had killed his wife with a shotgun.

-- Mary Ann Holder had been having an affair with a married man for about three years when on November 20, 2011, she shot him with a .38-caliber handgun in Greensboro, North Carolina. The man was only injured, but her son, niece, nephew and one of their friends were not so lucky. She fatally shot them before picking her son up from a sleepover and delivering to him the same fate, then killed herself.

-- Susan Diane Hendricks killed her ex-husband, two sons, and their stepgrandmother in Liberty, South Carolina, in October 2011 and told police one of her sons had done the killing. Authorities later learned she had taken out a $700,000 life insurance policy on her family members, naming herself as beneficiary.

Two examples that made neither the FBI nor the Everytown tally because they occurred before 2000 are Sylvia Seegrist, who fatally shot three people in a Springfield, Pennsylvania, shopping mall in 1985, and Brenda Spencer, a teenager who in 1979 opened fire on a San Diego, California, elementary school, killing the principal and a custodian.

The shooters were romantically involved

Despite Hollywood's penchant for romantically linked killers such as the real-life Bonnie Parker and Clyde Barrow or the fictional Mickey Knox and Mallory Wilson, it's highly unusual for lovers to perpetrate mass shootings.

That's not surprising considering how unusual it is for there to be multiple shooters in general.

The seventh example from the aforementioned Everytown analysis occurred in Crab Orchard, Tennessee, in September 11, 2013, but unlike the other six incidents involving women, police said this was a drug-related robbery.

Jacob Bennett and his girlfriend, Brittany Moser, are accused of killing a woman and three teens. Officials said the pair left the bodies in a parked car on the side of the road near Crossville.

According to a report in the Crossville Chronicle last month, the pair face a slew of charges, including several counts of murder, and are expected back in court in February.

They fled the scene

Farook and Malik went home after Wednesday's shooting, an odd occurrence in itself. The FBI statistics show that of the 160 active shooter scenes in its report, in only 29 did the shooter leave before police arrived. That's just over 18%.

Police brought the San Bernardino incident to a close when several officers opened fire on the pair after a police chase.

In 76 of the 160 cases, the shooter was arrested, subdued by civilians or killed.

Authorities exchanged a tremendous amount of gunfire with Farook and Malik -- the pair fired an estimated 76 shots at officers, while 23 officers unleashed 380 rounds in their attempts to subdue the shooters, according to police.

According to the FBI report, of the 45 incidents in which police and assailants traded gunfire, four ended with the shooter dying at a location other than the scene. Twenty-one shooters died on the scene, nine were wounded and arrested, nine committed suicide and two surrendered.

In 64 of the 160 instances, the shooter took her or his own life. While 10 did so somewhere other than the scene of the crime, 54 killed themselves at the site of the slayings.