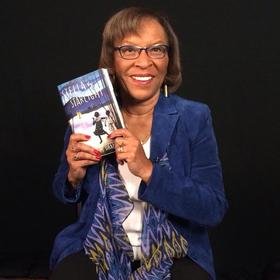 Cincinnati, OH - December 7, 2015 - New York Times bestselling author Sharon M. Draper released her latest novel, Stella by Starlight, at the beginning of the year, and is ending 2015 receiving considerable recognition for this historical fiction tale of courage and compassion based loosely on her grandmother's life. Stella by Starlight has been chosen as the winner of the 2016 Charlotte Huck Award for Outstanding Fiction for Children, which was announced at the National Council of Teachers of English Convention. The award recognizes fiction that has the potential to transform children's lives by inviting compassion, imagination, and wonder.

Stella by Starlight is a New York Times bestseller book and was also chosen by the new initiative, NYC Reads 365, to be read by all of New York City's grade 5 readers participating in the program. This campaign challenges New Yorkers to read every single day. Stella by Starlight is becoming a popular choice for students to read in schools all over the country.

"Draper expertly creates a character filled with hope, dreams and ambition in a time when such traits were dangerous for a girl of color...A tale of the Jim Crow South that's not sugar-coated but effective, with a trustworthy narrator who opens her heart and readers' eyes." - Kirkus Reviews

"This is an engrossing historical fiction novel with an amiable and humble heroine who does not recognize her own bravery or the power of her words. She provides inspiration not only to her fellow characters but also to readers who will relate to her and her situation. Storytelling at its finest." - School Journal Library

About Stella by Starlight

When the Ku Klux Klan's unwelcome reappearance rattles Stella's segregated southern town, bravery battles prejudice in this Depression-era tour de force. Stella lives in Bumblebee, North Carolina. Some stores she can go into. Some stores she can't. Some folks are pleasant. Others are a lot less so. Late one night, later than Stella should ever be up, much less wandering around outside, she and her little brother see something they're never supposed to see, something that is the first flicker of unwelcome change to come. As Stella's community--her world-- is upended, she decides to fight fire with fire. And she learns that ashes don't necessarily signify an end.

Draper has written over thirty award-winning novels, and is a five-time Coretta Scott King Award winner. She has served as the National Teacher of the Year, has been honored at the White House six times, and was selected by the US State Department to be a literary ambassador to the children of Africa and China. Draper was named a National Book Awards judge for Young Literature in 2014. She has received numerous accolades for her many New York Times bestsellers, including her two most recent novels, Stella by Starlight and Out of My Mind.