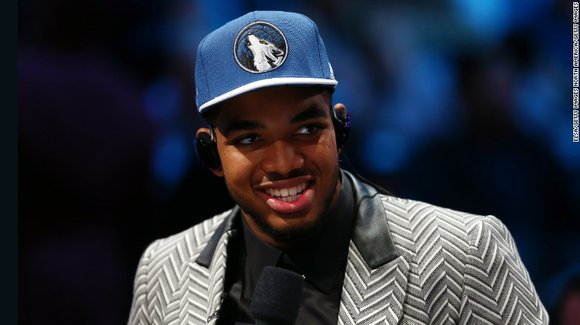 (CNN) -- When 19-year-old Karl-Anthony Towns needed to pick out an outfit for the biggest night of his life, he knew just who to call.

The standout freshman from Kentucky -- all seven feet of him -- wanted a one-off suit fit for June's NBA Draft, where he would become first overall pick.

Normally, a teenager with a no-max credit card on a shopping spree is a fashion disaster waiting to happen. But Towns joined nearly every other future top pick -- along with a sweeping tide of NBA veterans -- and hired a fashion consultant to get the look right.

"I didn't want him to go out there and be overshadowed by what he was wearing," Towns' style director Calyann Barnett tells CNN. "I still wanted him to make a statement, but not overshadow his true natural talent."

With Towns about to make his first impression as a professional, he couldn't afford any risks. The yearly event in New York has turned into basketball's equivalent of the annual Victoria's Secret fashion show, with long legs and distracting patterns everywhere.

"You want to make sure you are complementing the personalities with their looks, and that it doesn't seem too forced or contrived," says Barnett, who also works closely with Dwyane Wade, an experienced fashion maverick in the league.

It is also crucial to avoid a draft-day fashion disaster, which can haunt even the greatest players for years (just ask LeBron James).

"I think they're kind of going overboard a bit," the Miami Heat's Chris Bosh tells CNN of the rookie class. "If you look at the draft, it was kind of all over the place."

"It's cool to be a little traditional, and that way they won't keep on showing your picture 20 years from now," the dapper 10-time All-Star says, adding that he avoids giving young players style tips. "I let them make their mistakes, that's what it's all about."

To structure Towns' look, Barnett phoned frequent collaborator Adrien Sauvage, an East London menswear designer who cuts suits starting at £1,750 ($2,630) for Formula One star Lewis Hamilton, as well as actors Jude Law and Idris Elba. Wade is also a loyal customer, ordering 10 to 15 suits in a given year.

On Towns' request, Barnett ordered a one-off ensemble, but she strictly barred bright colors. "Some guys go out there and they're too loud," she explains.

Fortunately, Sauvage had something on hand that fit the bill: Eight meters (26 feet) of African herringbone wool fabric which he prepared for a design competition.

"(Towns) knew that no one would see it; it was literally the only fabric and pattern of its kind," says Sauvage, who is of Ghanaian heritage.

Moreover, as a former 6-foot 5-inch youth player for Great Britain who once teamed with Luol Deng, Sauvage says he can relate to the "nightmares that most tall people have."

He noted, for instance, that Towns' size 20 feet would make it tricky to wear slim tapered trousers. "How is he going to get his feet in those?" he asks.

On short notice, the designer was able to tailor the outfit for Towns, based solely on emailed measurements and the player's photo.

"I didn't even have a fitting," he recalls. "With Karl, they just got a local guy to take his measurements. No offense, but I never, ever can go off that. I literally just have to go, 'I don't think that's right.'"

"And you know what? When I sent it to him, it was 2 cm out on the waist and that was it," Sauvage beams.

Decorated in jagged black and white, the suit turned into instant draft-night classic -- in a good way -- to the delight of its owner.

"This outfit really was special to me," a smiling Towns said at a press conference following the event where, as expected, he was chosen first by the Minnesota Timberwolves. "(Sauvage) really blessed me with a one-of-a-kind suit for this special day in my life, and I really can't thank him enough."

Towns didn't mention the black loafers donning his feet that night, but he was equally grateful for his footwear -- a gift from Matthew Chevallard, founder of Miami-based Del Toro shoes.

"I'm like, here's a sample. If you like it, you know where to find me," says Chevallard, a diehard Heat fan who counts dozens of NBA players as clients.

"Obviously I get my own benefits from having the No. 1 draft pick walk in front of the whole world wearing my shoes, but at the same time it's awesome," he says. "I'm happy to make it even better for the guy."

Towns sent the shoe designer a thank you email and asked him to follow up with custom-made Timberland-style footwear, which he has never been able to find in his size.

Unfortunately, Del Toro simply did not carry equipment to make boots that large.

So the rookie happily agreed to pay $5,000 to set up the tooling for size 20, high-end work boots, which are in production.

With the suit and shoes out of the way, there was one decision left to prepare Towns for his congratulatory walk on the draft podium to meet NBA commissioner Adam Silver: Long tie, bow tie, or no tie?

"We knew that tons of guys were going to be in a bow tie," says Barnett. "Instead, we opted for jewelery, so we had this (gold) chain underneath his collar."

Although Barnett brought a bow tie to Brooklyn's Barclays Center as a backup that night, it's a good thing she didn't opt for it. The subtle gold ornament may have been Town's lucky charm -- with his career on the hardwood off to a flying start, the center is the early favorite to win Rookie of the Year.

Once those boots arrive, he may be gunning for a best-dressed award too.