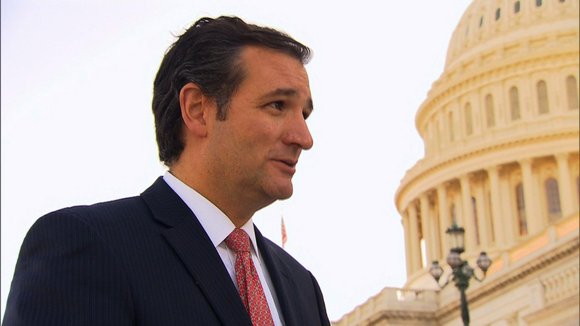 WASHINGTON (CNN) -- Ted Cruz and Marco Rubio brought their increasingly nasty immigration fight to the campaign trail Thursday, accusing each other of muddying their records for political expediency.

It's an extension of their exchanges in Tuesday night's GOP presidential debate, where Cruz hit Rubio for supporting a 2013 immigration reform proposal that granted undocumented immigrants a path to citizenship and Rubio shot back that Cruz, too, had pushed an amendment that granted those immigrants legal status.

Cruz has been on the defensive in the days after the debate on the issue, and on Thursday, the Texas senator looked to regain momentum after increased attention on his record. In a new television spot in Iowa, Cruz amplified his new line of attack, the first time Cruz has taken to the airwaves to outline contrasts between him and another candidate during his campaign.

"Securing our borders and stopping illegal immigration is a matter of national security. That's why I fought so hard to defeat President Obama and the Republican establishment's Gang of 8 amnesty plan," Cruz said in the direct-to-camera spot. "Their misguided plan would have given Obama the authority to admit Syrian refugees, including ISIS terrorists. That's just wrong."

Cruz, the senator from Texas, continued latching Rubio's support for the bill to President Barack Obama and influential Democratic Sen. Chuck Schumer in events across the country Thursday.

"For the first time in five debates, Senator Rubio publicly admitted not only did he support Obama and Schumer's amnesty but he still supports amnesty and citizenship today," Cruz said Thursday -- highlighting a Rubio stance that is anathema to the GOP's conservative base.

In Iowa, meanwhile, Rubio accused Cruz of trying to duck the issue -- pointing to his amendment that would have replaced citizenship with legal status for undocumented immigrants.

"He supports legalization, and I think his hope was once he got into the general election, to then start talking about legalization as a way to attract more voters," Rubio said.

The two are jockeying to become the Republican alternative to front-runner Donald Trump, and as each have climbed in the polls, they've ratcheted up attacks on each other over defense funding, U.S. government surveillance and other issues.

But the biggest dispute between Cruz and Rubio is over the two-year-old immigration bill that would have given undocumented immigrants a path to gaining U.S. citizenship. Rubio, as part of a bipartisan "Gang of Eight" in the Senate, helped author the reform measure. Cruz joined with other conservatives to defeat it.

Later, in Minnesota on Thursday, Cruz said that Rubio had broken the vow he had made to the voters who elected him in 2010.

"We made the identical promises to the men and women who elected us. But when 2013 came along, Senator Rubio and I made very different choices," he said, arguing that Rubio made that push primarily to court elite Republican donors. "Those decisions have consequences."

Cruz introduced a spate of amendments to that bill -- including one to strip out the path to citizenship and replace it with a measure that would allow those immigrants to gain legal status but never earn certain rights, like voting.

Cruz has called that a poison pill designed to highlight Democrats' hypocrisy by painting them as more interested in gaining votes than helping immigrants.

But Rubio isn't letting up, saying Thursday that Cruz shouldn't get a free pass on the amendment to grant legal status because of his explanation of legislative maneuvering.

"I think Ted Cruz needs to be clear about what his stance is today on that, but I can tell you what it's been in the past," Rubio said. "He strongly supported legalizing people that were in this country illegally."

If Cruz's position was unclear in 2013, he's clarified it since, saying during Tuesday night's debate that he hasn't and "doesn't intend" to support a path to legal status for undocumented immigrants. Some conservatives, however, have wondered whether Cruz's choice of words was intended to leave himself room to maneuver on that position in a general election.

But he repeated that pledge Thursday in Nevada.

"I oppose amnesty. I oppose citizenship. I oppose legalization for illegal aliens," Cruz said. "I always have, and I always will, and I challenge every other Republican candidate to say the same thing or, if not, then to stop making silly assertions that their records and my records on immigration are the same."

Rubio has also hit Cruz over an amendment that would have massively increased the number of H-1B guest worker visas -- a proposal that could have undercut the broader bill's political support by pitting business groups that support such an expansion against labor unions that oppose it.

"He was a supporter of legal immigration, as he said at the time and repeated to multiple media outlets for months," Rubio said Thursday.