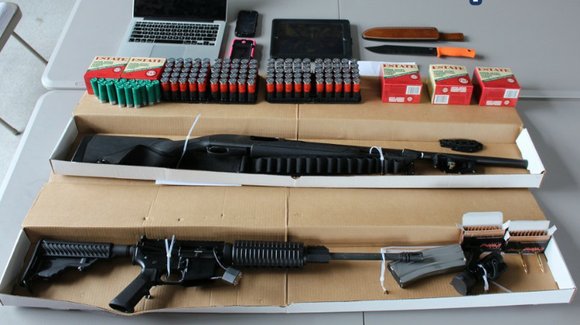 It permits Texans with concealed handgun licenses to now carry their holstered weapons in plain view.

But the law will still ban handguns from certain public places including churches, hospitals, correctional facilities, and some places where alcohol is served or sold.

Businesses also have the option to ban customers from openly carrying handguns by posting signs outside stores. Gun holders who ignore those signs risk violating state trespassing laws and would face penalties and fines.

Here's a breakdown of how some companies are choosing to act:

Whole Foods, which is headquartered in Austin, Texas, does not welcome firearms into its stores.

"As a private retailer; we have opted not to allow firearms on the premises except for store security," Whole Foods spokesperson Michael Silverman told CNNMoney in an email. He said that has been the policy since the company was founded.

He added that all Whole Foods locations in Texas will have updated signage addressing the new open carry law by January 1.

H-E-B, a popular grocery chain based in San Antonio, will continue to allow concealed handguns, but it's not allowing visible carry at its stores.

"We've always asked our customers to conceal their weapons," H-E-B spokesperson Dya Campos said. "The only difference now is that we have to post signage."

Campos said the company has not had issues with customers violating their firearm policies in the past. H-E-B has locations in 150 Texas communities.

Texas-based fast food chain Whataburger laid out its policy earlier this year after the bill was passed.

CEO Preston Atkinson wrote on the company's website that licensed carriers can bring concealed weapons, but the company will not permit open carry at its 780 locations.

"We've had many customers and employees tell us they're uncomfortable being around someone with a visible firearm who is not a member of law enforcement," Atkinson said.

Whataburger did not immediately respond to whether or not it will have signage ready by the new year.

The Texas branch of the NFIB, a small business association, said there have been different reactions to the new law among its 24,000 members.

Other businesses are opposed to open carry, and some have said the law's requirement to post a sign is "cumbersome."

More on the law

Some national retailers have also asked gun owners to leave their weapons at home but haven't publicly addressed how they're handling Texas' open carry statute. They include Target, Chipotle and Starbucks.

Retail giant Walmart, which sells firearms, did not respond to CNNMoney's requests for comment.

Simon Property Group has a no-firearm policy and does not plan to allow open carry at its more than 20 malls and retail centers in Texas.

"Once the law goes into effect, any shopper in possession of a weapon will be individually notified of Simon's existing policy by a member of the security or management team and asked to comply," company spokesperson Les Morris said.

Texas is one of 45 states that allow some form of open carry. Only five states (New York, Florida, Illinois, South Carolina and California) and D.C. ban open carry, according to the National Rifle Association.

To obtain a license, applicants must be 21 years old, pay a $140 fee, clear a criminal record check and complete a four-hour training course.