Boehner calls out Cruz to continue fight with administration on immigration 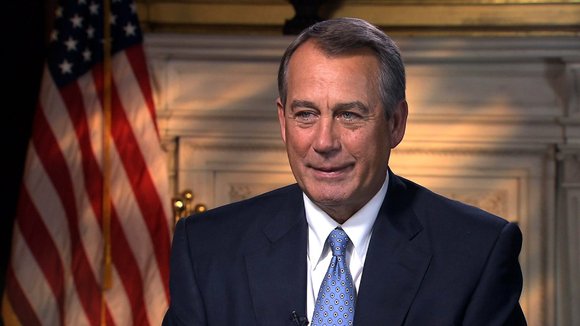 "We won this fight in the House. Now the fight must be won in the United States Senate," Boehner said, adding, "it's time for Senator Cruz and Senator Sessions and Senate Republicans and Senate Democrats to stand with the American people and to block the President's actions."

The Speaker's move to name check Cruz and Sessions -- two conservatives who prodded the House to tie funding for the Department of Homeland security to measures to block the Administration's immigrations policies -- was a deliberate move to shift the focus to the Senate.

Rank and file House GOP members across the political spectrum have said they have done everything they can to deny the administration the ability to implement its executive actions on immigration. They are eager to pass the baton to Cruz, along with the pressure to explain the strategy now for trying to pass the House bill, which multiple aides acknowledge doesn't have the 60 votes needed to avoid a Democratic filibuster in the Senate.

Boehner also tried to ramp up pressure on those Senate Democrats who have publicly disagreed with the Obama Administration's decision to allow more than 5 million undocumented workers who entered the country illegally to remain in the U.S.

Senate Democrats are expected to block a vote on Tuesday to take up the House passed DHS bill that that includes a series of amendments aimed at rolling back the president's immigrations policies.

For her part, McCaskill returned the attack on Republicans, saying it was their efforts holding up reform.

"So what I said, while I would not prefer executive action, I always prefer legislative action, that responsibility lies directly in the chair of Speaker Boehner who has refused to defy the tea party and do what's right for this country," she said in an interview in a Senate hallway.

At a closed door meeting with all House Republicans Boehner also stressed that the focus needs to be on the Senate, according to multiple Republicans who attended the meeting.

Democrats have warned about the potential for serious security issues for agencies tasked with managing the border and airports if Congress fails to approve a spending bill before the end of the month deadline. They have pointed to comments from some Republicans on Capitol Hill that suggest there wouldn't be any major problems if the agency had a partial shutdown.

Asked if he agreed with those who downplayed the effects of not approving money for the Department of Homeland Security, Boehner said "the goal is not to run DHS out of money, the goal here is to stop president's executive overreach."

Both House and Senate GOP leaders have declined to say what happens when Democrats block action on the House bill. While most House Republicans insist they will not support a so-called "clean" spending bill for DHS, Rep Carter, who stressed his state has a 1200 border with Mexico, didn't rule out that the House may vote again on alternative measures.

"We'll send them something else. Ultimately there may be a clean bill sent," Carter said.