Dancing with the Stars Comes to Houston 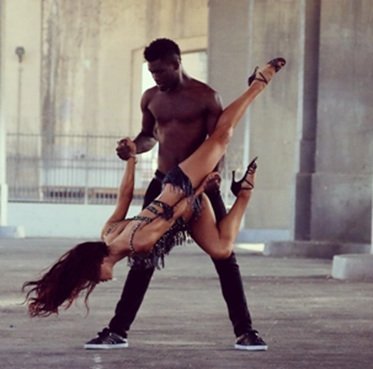 Keo Motsepe in action with his dance partner

Houstonians were able to experience the Dancing with the Stars Tour this past Thursday when the “Ballroom Dancing Rockstars” made their way to the Bayou City Music Center.

The theatrics included Latin-style dancing, ballroom, and a little pop and hip-hop mixed in. Onlookers were thrilled to see their favorite dancers shimmying and shaking to the famous moves seen on television.

A surprise of the night came with the stars showing off their hidden talents that included Whitney’s hysterical trombone impression and Houston’s own Mark Ballas debuting his singing chops as well as playing the guitar proving there’s way more to him than just his fancy foot work. Also revealing another layer of him was Valentin who played the violin beautifully.

After a brief intermission, the dancers participated in a personal Q&A as they shared their favorite tour moments, costume disasters, words of appreciation and more. Mark’s dad Corky Ballas joined his son on stage to reveal some shocking not-so-known secrets from when he was on the show. The audience swooned as Valentin slowed dance with one luck lady in the audience and ended their unforgettable dance with a kiss on the cheek. Three men in the audience complete with feather boas were asked to come to the stage and join in a dance number with the DWTS ladies.

The night ended with Alonzo performing his famous freestyle with Whitney. The night ended just the way it started….on fire with an all ensemble high energy routine that had everyone on their feet.

Whether you are a fan of the hit TV series or are looking for a night of entertainment, I highly recommend checking out the Dancing with the Stars tour when it comes to your area. The show is flawless and you can tell everyone involved loves what they do and appreciate their success. Talented and charismatically alluring, the Dancing with the Stars’ stars have bright futures ahead of them.