FCC will seek heavier regulation of the Internet 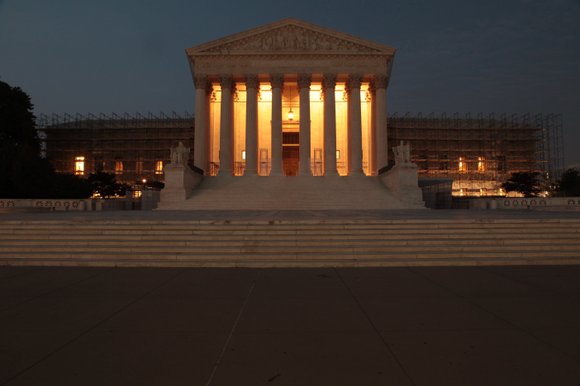 The lights are on at the Supreme Court a quarter past nine on Tuesday, June 19, 2012. The justices will hand down rulings on 15 cases before the end of the month, including FCC policies against TV indecency.

NEW YORK (CNNMoney) -- The FCC is set to propose a major change to the way the Internet is regulated.

FCC Chairman Tom Wheeler plans to introduce a proposal that would reclassify high-speed Internet service as a public utility, according to a person who has consulted with the FCC on the forthcoming proposal.

The person insisted on anonymity because Wheeler had not yet spoken publicly about his plans. This person said Wheeler will hold a press briefing about his proposal on Tuesday, but the FCC denied any such event would go on.

However, Wheeler promised the FCC would vote on the rules at its Feb. 26 meeting, so following FCC procedure, he must present them to colleagues by this Thursday.

By making broadband a public utility, the FCC would gain far more power to regulate the kinds of network-access arrangements that Internet providers make with content providers, such as Netflix and Google.

Under the proposed new rules, the FCC would ensure that broadband companies don't unfairly discriminate against content providers by creating "slow lanes" on the public Internet, according to CNNMoney's anonymous source. But there might still be "fast lanes."

If, for instance, a video streaming service like Netflix feels it is being unjustly charged for the distribution of its content, it will be able to bring a case before the FCC, according to the current draft of the proposal.

"There's a cop on the beat, but we're not going to tell you what's illegal yet," the person said.

Wheeler's approach falls in line with President Obama's firm stand in November that the Internet should be more heavily regulated to ensure it stays open and independent.

The FCC has tried -- and failed -- to regulate this kind of behavior before. Federal courts have blocked the agency, saying that it overstepped its authority. Wheeler's approach is a workaround: Reclassifying Internet providers scoops them up under the FCC's purview.

Even if the the proposal is acceptted, major hurdles remain.

When Internet providers fight the FCC in court (and they likely will), they'll point out that the FCC is implementing a rule that's only relevant 1% of the time, said Robert M. McDowell, a former FCC commissioner turned telecom lawyer in Washington, D.C.

"The FCC's planting a big seed of regulation that'll probably only grow," McDowell said. And that might one day mean extra rules for Google and Netflix, which have data centers and could be considered network owners too.

"These [telecom companies] are consolidating, monopolizing and controlling wider swathes of broadband... you have to protect public interest," said Michael Copps, a former FCC commissioner who now leads Common Cause, a populist citizen lobby group.

Given the uncertainty about what's actually in the proposal, Free Press, one of the foremost public interest groups that has been lobbying for strong net neutrality protections, was careful in its statement on Monday, saying "we can't judge what we have yet to see."

"If the FCC does that -- and also keeps the final order free of loopholes and industry meddling -- the chairman should be cheered by the millions who have mobilized to save the Internet," Aaron said.