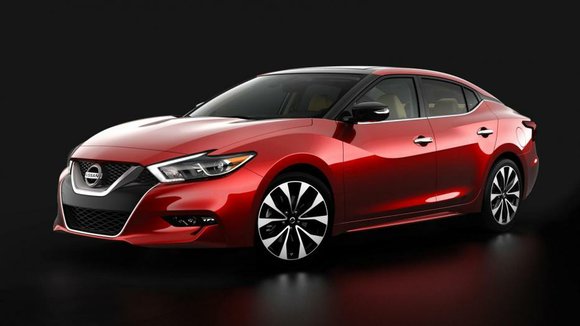 The 2016 Nissan Maxima, which goes on sale later this year, will closely track the design of the 2014 concept car.

If you watched all the Super Bowl commercials last weekend, then you probably noticed an unnamed vehicle appeared at the end of the Nissan spot. That unnamed sedan was our first glimpse of the production 2016 Nissan Maxima, which will receive a redesign for the next model year. Today Nissan released the first official image of the 2016 Maxima, which will go on sale in the U.S. during the second half of this year.

This new image reveals that the 2016 Maxima will be remarkably close in terms of exterior design to the Nissan Sport Sedan concept car which was shown at the 2014 Detroit auto show. The sedan will receive the new corporate grille which has already spread to the Nissan Rogue, and it will also retain the dramatic character lines seen on the Detroit show concept. The headlight eyebrows have been toned down just a bit on the production version, in addition to the foglight inlets being integrated into the front bumper and being painted body color. The profile of the side windows has also been revised for the production version, with a less rakish look, one aimed at maximizing (no pun intended) visibility, though a black-painted character line in the C-pillar continues to the back just like we saw on the concept version of the sedan. The shutline of the rear doors has also been softened a bit on the production car.

The 2014 Sport Sedan Concept also featured a very rakish roof with the angle starting all the way at the A-pillar -- something that would have compromised headroom in a production car. Aside from these items and the usual nonproduction auto show exaggerations like wheels, ground clearance, door handles, and impossibly tiny mirrors, the 2016 Maxima stays true to the concept version.

We'll see the production 2016 Maxima in the metal at the New York auto show in April, where Nissan will reveal the full production specifications of the upcoming sedan.