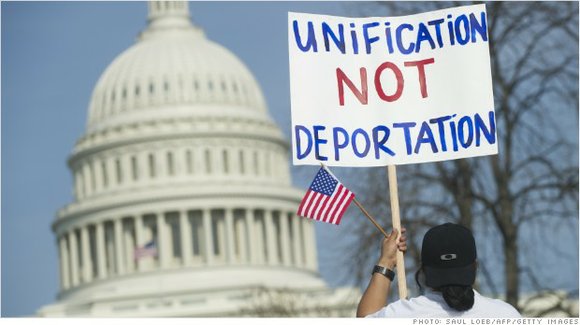 WASHINGTON (CNN) -- For the third day in a row, Senate Democrats blocked Republicans from beginning debate on a bill to fund the Department of Homeland Security, which will run out of money Feb. 27. The vote was 52-47.

All Democrats voted against the measure because they oppose immigration-related amendments added to the bill when it cleared the GOP-controlled House. Republican Sen. Dean Heller also voted against the bill. Senate Majority Leader Mitch McConnell voted no for procedural reasons because it will allow him to bring it up for a fourth time if he chooses to.

One reason for the multiple votes is so Senate GOP leaders can showcase for House Republicans that despite their efforts to pass the House bill, it can't get enough Democratic votes to pass in the Senate as long as it carries the immigration provisions. That might force House Republicans to rethink their position on immigration and decide to take that fight up later.

"Part of coming to a solution is going to be showing that we're doing our best to fight for the House position," said Sen. John Cornyn, the No. 2 Senate Republican told reporters on Wednesday after the second vote.

It remains unclear how House and Senate Republican leaders will reach a solution that can meet the differing political needs of each chamber. Multiple House Republican members told CNN the focus now is to increase the pressure on the Senate to figure out a way to pass the measure.

There have been no serious discussions about any potential back up plan if the Senate can't pass a bill.

North Carolina GOP Rep. Richard Hudson told CNN, "We've acted, we've done what we need to do," and House Republicans are waiting to see what the Senate Republicans can do to force Democrats to take up the House-passed bill.

"We've got some allies like Ted Cruz and Sen. [Jeff] Sessions who I'm hopeful can work some magic and convince their colleagues to go with them," he said.

Cornyn acknowledged Wednesday, the Senate eventually might be forced to take up its own compromise bill and send it to the House.

"Either the House would have to pass a different piece of legislation, which I don't believe they are prepared to do at this time, or something would have to be generated here in the Senate," Cornyn said. He declined to elaborate on what that might be.

McConnell blasted Democrats on Wednesday for not standing up to President Barack Obama when he went around Congress and issued the far-reaching immigration orders that the Republicans want to ditch.

"Today's Democrat Party seems willing to go to any extreme to protect the kind of executive overreach President Obama once described as 'not how our democracy functions' -- even to block Homeland Security funding to get its way," McConnell said on the floor Wednesday.

One possible compromise idea being proposed by Maine GOP Sen. Susan Collins is to narrow the immigration fight on the DHS spending bill. She filed an amendment on Wednesday that would block funding for Obama's executive orders from late last year -- that would allow millions of immigrants who are here illegally to stay in the U.S. -- but would leave in place the orders from 2012 affecting the so-called Dreamers, young people brought to this country by their parents. Twenty-six House Republicans voted against the Dreamers' amendment arguing it went too far.

Collins believes she might be able to pick up the support of several Democrats who have in the past criticized Obama for going around Congress with his executive actions although two Democrats -- Joe Manchin of West Virginia and Claire McCaskill of Missouri -- said the Collins' proposal wouldn't budge them and there was no evidence any other Democrat would move.

One House Republican, Texas Rep. John Carter, said he was open to the Collins approach. But another Texas GOP member, Rep. Bill Flores, chair of the conservative Republican Study Committee, was not.

Flores urged all his members at a lunch on Wednesday to lobby their senators - both GOP and Democrats alike - to stay the course and insist the Senate pass the House bill, including all the immigration restrictions.