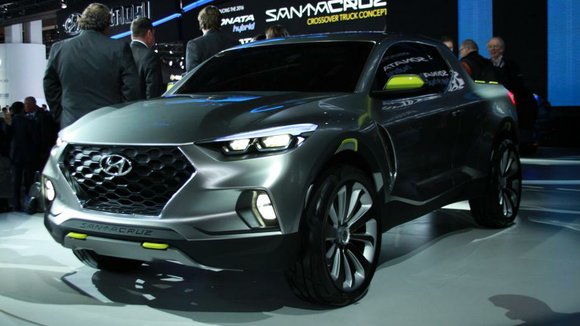 The Hyundai Santa Cruz Crossover Truck Concept during its Detroit auto show debut in January; the concept makes its second appearance in Chicago.

Hyundai is bringing a little bit of everything to the Chicago Auto Show. Its Santa Cruz Crossover Truck Concept will make its Windy City debut, the Tucson Fuel Cell will be driven by media, and the company’s tuner vehicles from the SEMA show will make an appearance. The company will also debut two new products, including a special edition Veloster that we’ll find out about on Thursday.

The Santa Cruz was first revealed at the Detroit auto show with a decidedly “millennial” twist. It's supposedly aimed at urban explorers, sports players, snowboarders and beach chillers. It hypothetically gets a 2.0-liter turbodiesel engine making 190 hp and 300 lb-ft of torque. The rear doors are also rear-hinged, giving back passengers easier entry.

The Tucson Fuel Cell, one of the first mass-produced fuel cell cars available for lease, will also make its Chicago debut. The EV replaces the battery pack with an electricity-generating hydrogen fuel cell. It’s an electrochemical process that doesn’t involve hydrogen combustion. There are no moving parts in the fuel stack either, which means there are fewer parts that could break. It fills up quickly like a gas engine, so no big recharge times either.

Stay tuned for more news and debuts from the floor of the Chicago auto show.