Chapel Hill shooting: When is a crime a 'hate crime?' 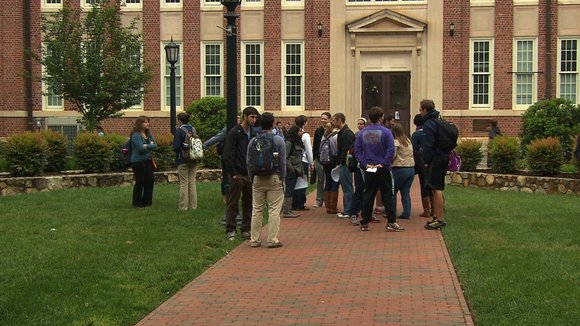 (CNN) -- The cries from family members and shocked Muslims are clear: Call it what it is, a hate crime.

They say Craig Stephen Hicks hated religion and that he was riled at the sight of his Muslim neighbors -- two of them young women who wore hijabs.

When he allegedly killed Deah Shaddy Barakat, 23; Yusor Mohammad, 21; and Razan Mohammad Abu-Salha, 19, it had the hallmark of a summary execution -- shots fired to the victims' heads.

But police in Chapel Hill, North Carolina, say the Tuesday evening shooting appeared to be fueled by rage over a parking space. Hicks' wife says it was a dispute between neighbors.

Some allege there's a double standard at play here. They say that if the situation was reversed, law enforcement and the media wouldn't hesitate to call it a hate crime or a terrorist act.

When is something a hate crime?

It's a hate crime when violence is tinted with discrimination.

The FBI defines it as "a traditional offense like murder, arson, or vandalism with an added element of bias."

That bias can go, among other things, against race, gender, sexual orientation or disability.

"To qualify as a hate crime, all that matters is that the crime was motivated, in whole or in part, by the offender's bias," CNN legal analyst Sunny Hostin said.

It also applies in cases of mistaken identity -- for example, it someone attacks a person because he thinks they're gay, but they're not.

After the 911 attacks, some Sikh men, who typically wear turbans, were mistaken for Muslims and attacked.

Does it make a difference legally?

In the justice system, the old adage that words can never hurt you is dead wrong.

Labeling something a "hate crime" can make the law come down much harder on a defendant. It adds a new serious charge that can come with a heavy additional sentence.

He and friends had expressly set out for a night of targeted hassling of black people, screaming racial insults and yelling, "White power."

Though it's the states that try hate crimes as a rule, federal authorities can snow in and push forward their investigation and prosecution.

He caught the wrath of the federal government as well. On Tuesday, he was sentenced to 50 years in a federal prison.

"The defendants targeted African-American people they perceived as vulnerable for heinous and violent assaults -- hate crimes, motivated solely by race, that shook an entire community and claimed the life of an innocent man," Attorney General Eric Holder said in a statement.

Finally, even if a defendant is acquitted on a state level, the Justice Department can prosecute a case as a "hate crime."

Case in point: In 2011, a federal court convicted two Pennsylvania men of a hate crime after the state acquitted them of murder.