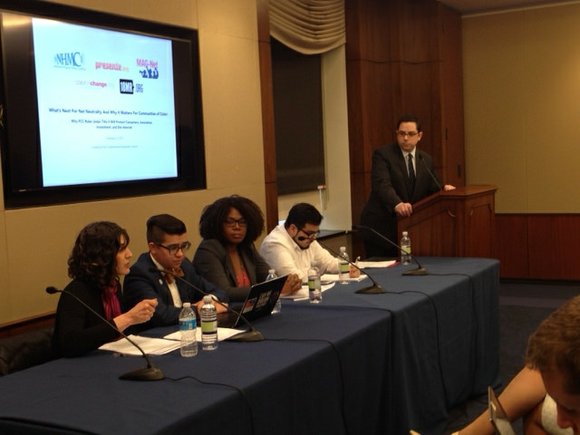 Racial justice leaders advocating for Internet for all.

Washington, DC - Today, racial justice leaders joined Progressive Caucus Chair Keith Ellison to advocate for net neutrality as essential to equal access to the Internet for all. With the FCC poised to implement new rules protecting a free and open Internet, as proposed by FCC Chairman Tom Wheeler last week, racial justice groups came to the Hill to urge Congress to support the FCC’s implementation of net neutrality.

The groups are meeting with dozens of members of Congress throughout the day today, requesting support for the FCC as it completes its process and explaining why an open Internet is a critical tool for empowering Latinos, African Americans, Asian Americans and others to contribute to economic, educational, and political discourse in the digital age.

Statements from groups involved in today’s event are below.

“The Internet is vital to all communities and essential to the political participation of communities of color. Congress should allow the FCC to protect and regulate the Internet as the essential utility it is for tens of millions of Americans. For Latinos and many low income communities of color, who have long been left out of mega Telecoms corporations’ Internet access priorities, a free and open Internet is essential for our participation in everyday life. We demand access, and we won’t settle for anything less.”

“The organization of this delegation and the events that comprise our day of action are, in and of themselves, a powerful example of precisely how the Open Internet enables communities of color to engage in the political process and create positive social change. We thank our gracious hosts, Congressman Keith Ellison and Congressman Raul Grijalva, two champions of real net neutrality on the Hill, and we hope that our visits will inspire others to join the cause.”

"Net Neutrality is a critical step in closing the economic, educational, and other racial equity gaps that disadvantage communities of color. That is why our network of 175 grassroots organizations across the country has been organizing for strong and enforceable Net Neutrality rules at the FCC. It is the only way to ensure our communities can rely on an Internet free from discrimination.”

“As the best-connected racial demographic in the U.S., Asian Americans have a major stake in net neutrality, and that includes mobile broadband. We have long relied on the Internet to enrich our economic, civic, and family lives. Title II reclassification is in the best interests of our community, and for the preservation of key rights as emerging players in the American political landscape.”

“The Internet and mobile technology platforms have been a crucial tool in our ability not just to speak out against injustice but organize online and offline for equality and dignity. Over the last 5 years we've seen an increase in the number of net neutrality champions in the Congressional Black Caucus. Many of the most influential Black members of Congress are defending the online digital rights of communities of color. They are starting to realize that the Internet isn't a luxury anymore, it's a necessity.”