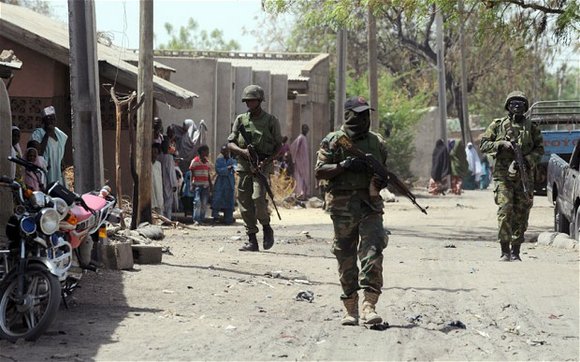 The Islamist group -- considered one of the world's most deadly terrorist organizations -- has said its aim is to impose a stricter enforcement of sharia law across Nigeria, which is split between a majority Muslim north and a mostly Christian south.

(CNN) -- Boko Haram fighters have carried out their first known lethal attack in Chad, the U.N. refugee agency said Friday, as the threat from the Nigeria-based Islamist militants spills over into neighboring nations.

The fighters killed four civilians and a soldier in the predawn attack on the fishing village of Ngouboua on the shores of Lake Chad, according to residents and Chadian security sources.

The attack came hours after 21 people were killed in two separate attacks on Akida ‎and Mbuta villages near the northeast Nigerian city of Maiduguri, according to residents and a local community leader.

Adrian Edwards, spokesman for the U.N. High Commissioner for Refugees, told reporters in Geneva, Switzerland, that news had come in overnight of the attack on Ngouboua and details remained hazy.

"We are still getting information about how many people affected, we know that thousands of refugees were there," he said.

"The reports that we've received, the town was attacked by about 30 militants using boats, they attacked parts of the town itself, the 'chef de canton' himself was killed. We were in contact with a refugee during the attack but the phone line went dead. We are still trying to find out more about the situation there."

Mamadou Dian Balde, of the UNHCR in Chad, later told CNN that the chef de canton, or local leader, who was killed had been "a great champion of refugee protection."

Authorities have not yet confirmed the final death toll, he said. But reports from the ground indicate three-quarters of the village was torched by the attackers and many residents have fled to surrounding areas.

The village was peaceful and had generously taken in many refugees from the conflict in neighboring Nigeria, he added.

The violence in northeast Nigeria has caused more than 157,000 people to flee into Niger, Cameroon and Chad, Edwards said. Some 100,000 of those are in Niger, 40,000 in Cameroon and the remainder in Chad.

Nearly 1 million more people are believed to be internally displaced inside northeast Nigeria, according to that country's national emergency management agency, Edwards said.

"With the violence that's plagued northeast Nigeria spilling over into Niger, Cameroon and Chad, UNHCR is now calling for urgent humanitarian access to refugees and internally displaced people in these countries to provide urgently needed assistance," he said.

"For many refugees, for locals, for aid workers too, the situation is now becoming increasingly terrifying."

Earlier this month, several African nations -- including Nigeria, Niger, Benin, Cameroon, and Chad -- pledged to deploy 8,700 troops, police and civilians as part of a regional effort to fight Boko Haram.

The assault by Boko Haram on Chadian soil may be a response to that initiative.

An attack earlier this month by Boko Haram militants against Chadian soldiers on the border between Cameroon and Nigeria left 13 dead and 21 injured, the United Nations said last week.

The Chadian soldiers were deployed to fight Boko Haram in Cameroon and Nigeria.