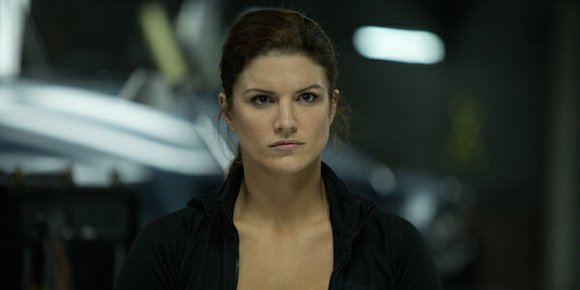 After years in development hell, Deadpool is finally heading to the big screen next year and giving Wade Wilson a second chance to impress the audience in a way that X-Men Origins: Wolverine wasn’t able to. With production set to begin next month, more news has been coming out about the film recently. Earlier this week, Ryan Reynolds, who is reprising the role of the titular mercenary, teased the mask he’ll be wearing in the film, and now we know that Haywire star and mixed martial artist Gina Carano will be appearing alongside him.

According to THR, Carano will play Marvel character Angel Dust. It hasn’t been revealed how significant her role will be, but she is the second actor to be cast after Reynolds and T.J. Miller, the latter of whom is said to bring "comic relief." Carano is also known for playing Riley Hicks in Fast & Furious 6, and she’ll be starring in Bus 657 and Kickboxer later this year. According to the synopsis provided in the article, Reynolds will play a mercenary struck with cancer who goes through a procedure to be cured, but is instead "twisted and scarred" while also gaining superpowers.

In the comics, Angel Dust is a member of the Morlocks, a group of mutants that lived underground. She has the ability to increase her adrenaline, gaining super strength as a result. It’s unusual that she would be picked over an established female Deadpool character like Domino, but it won’t be the first time that the X-Men movies have mixed and matched mutants. Given Carano’s fighting background and her previous action roles, it’s a sure bet that she’ll be kicking ass throughout. Who knows, maybe she’ll go toe-to-toe with Deadpool, either as an adversary or in a situation rife with a comical misunderstanding.

The article also mentioned that Colossus will be appearing in the film, which isn’t entirely surprising. Several years ago, the Deadpool screenplay written by Rhett Reese and Paul Wernick leaked online, and Colossus was included as the straight man opposite the wacky Merc With a Mouth. Since he was basically just used as muscle in his previous three appearances and barely had any dialogue, any role he has in Deadpool will assuredly more substantial. It’s unknown whether Daniel Cudmore will reprise the role or if he’ll be recast with a more well-known actor.

Deadpool will be released in theaters on February 12, 2016.