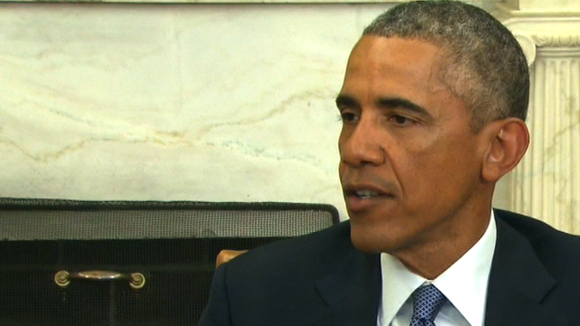 And aboard Air Force One on his flight to Detroit, White House Press Secretary Josh Earnest was peppered with questions like, "With respect to the situation in Paris, does the U.S. have an assessment...on who these gunmen were?" And, "At this point, you can't say whether these gunmen were linked to any terror organization?" And, "..is the U.S. concerned about any risk here from this group?"

WASHINGTON (CNN) -- Republicans on Capitol Hill on Tuesday praised a federal judge's ruling to put the brakes on President Barack Obama's executive action on immigration, but the ruling doesn't immediately appear to settle the political standoff over funding the Department of Homeland Security.

Instead, Republicans say the ruling has united and emboldened them to stand firmly by their strategy of tying funding for the homeland security agency to efforts to kill Obama's executive action, and urged Senate Democrats who have blocked those efforts to heed the ruling.

"Hopefully, Senate Democrats who claim to oppose this executive overreach will now let the Senate begin debate on a bill to fund the Homeland Security department," House Speaker John Boehner said in a statement.

Boehner again repeated his claim that Obama took his executive action despite saying "22 times" before that he had no authority to take such action unilaterally. Obama had said he could not act unilaterally on immigration reform, but Democrats have argued the President was not referring to the type of actions he ultimately took.

The Obama administration said in a statement Tuesday that Obama's executive actions "are well within his legal authority" and that the Justice Department has indicated "that it will appeal that decision."

President Barack Obama said Tuesday he's confident that a Texas court's injunction against his executive order delaying deportations for millions of immigrants will ultimately be overruled, and is preparing to implement the order under that assumption.

"The Department of Homeland Security will continue with the planning because we want to make sure that as soon as these legal issues get resolved --- which I anticipate they will, in our favor --- that we are ready to go," he told reporters.

U.S. Attorney General Eric Holder called the ruling just an "interim step" in a legal process that will take some time to play out.

"This is a decision by one federal district court judge," Holder said Tuesday at the National Press Club, adding that the Justice Department is reviewing the ruling to determine the next step.

And Homeland Security Secretary Jeh Johnson said in a statement Tuesday he "strongly" disagrees with the judge's decision, but said his department would comply with the injunction while awaiting the results of an appeal.

His department was slated to begin accepting applications for the DACA expansion Wednesday.

Boehner said on Fox News Sunday that he was willing to let the agency go unfunded. The deadline to fund the department is Feb. 27.

Senate Majority Leader Mitch McConnell, who indicated last week that the House bill had no path forward in the Senate because of Democratic obstruction, urged his Democratic colleagues in a statement Tuesday to take note of the federal ruling and change course.

It's unclear how the federal judge's ruling will affect public opinion, but a CNN/ORC poll conducted before the decisions revealed that a majority of Americans would blame GOP lawmakers if the Department of Homeland Security shuts down. According to the poll, published Tuesday, 30% said they would blame Obama.